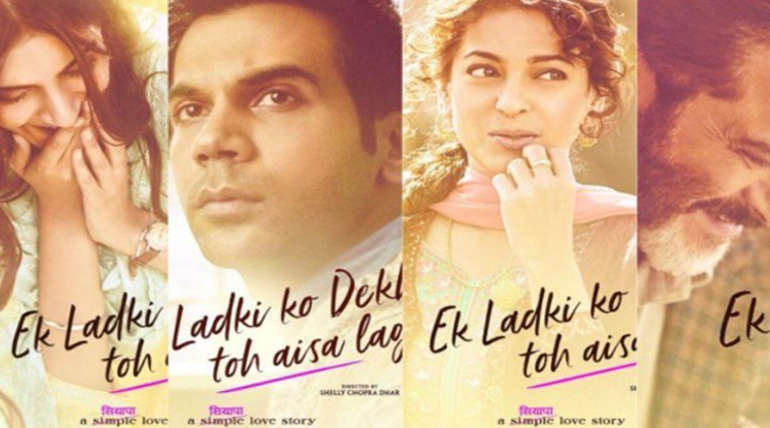 Shelly Chopra Dhar Co-written and directed   Bollywood release Ek Ladki Ko Dekha Toh Aisa Laga has earned Rs 3.30 crore on the first day of its release.The movie deals with lesbian relationship and is tagged as â€˜the most unexpected romance of the year.â€™

Trade analyst Taran Adarsh tweeted the collection of the Sonam Kapoor starrer as â€œ#EkLadkiKoDekhaTohAisaLaga had a lacklustre start, but picked up at select urban centres towards eveningâ€¦ Growth on Day 2 and Day 3 essential for a respectable weekend totalâ€¦ Fri INR 3.30 cr [1500 screens]. India biz.â€

Film trade analyst Girish Johar told to a journal , â€œEk Ladki Ko Dekha Toh Aisa Laga is a niche, high-end romantic drama with a twist. Now it remains to be seen if the audience will accept this twist or not. With a limited release, it will probably earn around Rs 2.5-3 crore on the day of its release.â€

The film Ek Ladki Ko Dekha Toh Aisa Laga has strong competition with Kangana Ranautâ€™s Manikarnika: The Queen of Jhansi, Vicky Kaushalâ€™s Uri: The Surgical Strike.  Girish Johar also said, â€œEk Ladki Ko Dekha Toh Aisa Laga is toplined by Anil Kapoor, Juhi Chawla, Sonam Kapoor, Rajkummar Rao and these are the actors who audience wants to see. And, it is coming from Vidhu Vinod Chopra, so I expect it to have quality content. It is looking quite decent but again the performance on the first weekend will be based entirely on word of mouth.â€

He added, â€œThe Anil Kapoor starrer will be the first choice of the audience. Uri is also going strong and people are going into repeat mode with it, so it all depends on how Ek Ladki Ko Dekha Toh Aisa Laga start off in the theaters. It has the potential to lead over the weekend but if it doesnâ€™t match up to the standards then definitely other films will take over.â€

#EkLadkiKoDekhaTohAisaLaga had a lacklustre start, but picked up at select urban centres towards evening... Growth on Day 2 and Day 3 essential for a respectable weekend total... Fri ? 3.30 cr [1500 screens]. India biz.