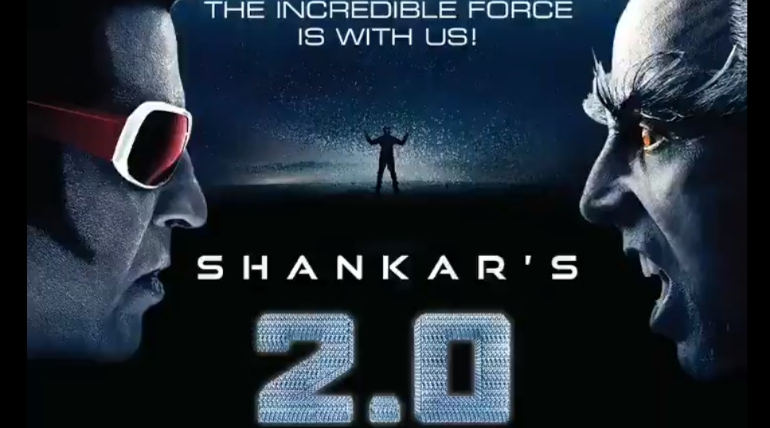 The Magnum Opus which was under making for the past two years has shown the justification for the delay by some extravagant visuals. The visuals are good enough to say as it delivered the promised quality, when have we seen such a perfectly VFX'd visuals for a fantasy/sci-fi film? In that way, indeed Shankar reached the milestone of making a grandeur film with big bucks and sheer filmmaking skills. But did the film really stand true to the quote as a whole is the question.

The film gets straight into the story without wasting any time as the phones start flying, leading to the solution by Vaseegaran to revoke Chitti. The intro shot of the film showed an epic lead for the film and it is not Rajinikanth like it usually happens. A mere glimpse of Akshay Kumar in the first frame hinted the fact about the scope the actor has in this film. The first half is filled with the phone flying sequences keeping the core idea and Villain under suspense.

The usual treatment followed in the film of such a greater scale is a let down in many frames. As the dialogues like vada poche and some one-liners reduce the seriousness of the film. We've seen a lot of Shankar films all these years with parallel comedy, love tracks along with the story. But this film really doesn't deserve such forced elements like Robo love and comedy, to say the least. Will be great for the film if at least those elements have connected the audience.

Return of Chitti would have demanded more pulse with the viewer, given that the first part had a huge hype for the deadly robot. The first part which came before 8 years had a life for the characters, though it also had all the commercial elements (kind of worked out). In 2 Point 0, Chitti looked hopeless throughout and when the red chipped Chitti 2.0 comes with that epic bgm, it gave a pretty enough reason for the audience to cheer.

It wouldn't be a spoiler saying the name of Akshay Kumar and nothing will be revealed here except that. Pakshirajan is sure to steal everyone's heart with a portion carrying the complete soul of the film. Akshay with his conviction conveyed the heart of the film subtly rooting the core subject that the maker had to say to the audience. Being introduced as a new character, Akshay made it easily into people's heart with his never seen before characterization. Rajinikanth at this age manages to carry the mass aura he's holding all these decades and Amy Jackson's addition didn't make much change to the film except the attempt of giving some comic relief to the audience.

AR Rahman never let the hype of the film down at any moment by keeping the audience connected through his pulsating beats. Pullinaangal made more sense for the film taking the empathy of the core plot to reach everyone. Art direction and Editor of the film shined in their job as both looked absolutely spotless in the film while the sound designing is sure to own some awards for mesmerizing the viewers.

Given all the hype for the climax both the bird and the gigantic transformers like figures didn't give an expected impact and was dull like the role of the son of Bora. Some misfit can be noticed at chasing sequence during the entry of Chitti even at the fantastically made visuals. Sana's phone voice then and there, Chitti's upgraded re-entry through the mirror and some music from the previous part doesn't fail to get some shoutouts.

There weren't many surprises in the film except the one in the climax, most of them being predictable could be a reason for saying this. The absence of Sujatha is felt more now as the brainchild of Sujatha and Shankar engaged much lesser than the first part. Overall, 2 Point 0 deserves a watch for its' technical brilliance and the much needed social message said in the film.

2.0 is a technically topnotch Picture with an important social insight, letdown by forced elements and worn out masala treatment! manages to seed the visionary thought with a staggering screenplay.