Chiyaan Vikram Croons a Song for Kadaram Kondan with Ghibran 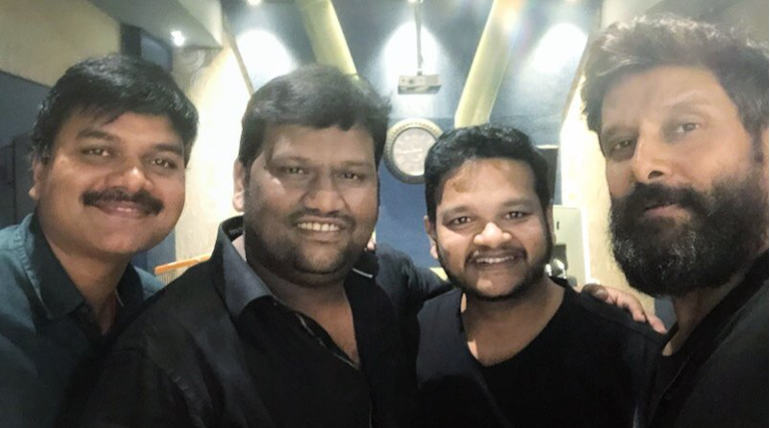 Chiyaan Vikram's Kadaram Kondan is getting ready for Summer release while the song recording sessions are happening for the film. Ghibran who is composing the music for Kadaram Kondan is scoring the bgm and music and the teaser showed a glimpse of his work. He tweeted the news about Chiyaan singing a song on his twitter wall and gave a pleasant surprise to fans.

The Raaj Kamal Films International is producing the film and Akshara Haasan is playing the female lead in this Rajesh Selva directorial. The director previously impressed everyone with his thriller film with Kamal Haasan, Thoongavanam. Now another thriller with a bigger base set in Malaysia this time, Kadaram Kondan is expected to be a smasher from the team.

The film is announced to be a summer release and April second weekend is said to be the tentative release date for the film. The film is completely shot in Malaysia and the teaser already created hype for the film with breath-taking action cuts throughout. After the star sang peppy romantic numbers in his films Sketch and Saamy Square recently, he is about to impress the audience once again with an energetic track this time.

Yaaay! Positivism kicks in.
I'm glad to have recording done with the great & multitalented #vikram sir for #KadaramKondan, singing with full energy +vibes +enthusiasm. I believe ðŸ¤˜ðŸ¼this as a #motivational song - can be played before starting our day.#vikramsingsforkadaramkondan pic.twitter.com/ou1dpXWRd4

Chiyaan Vikram Croons a Song for Kadaram Kondan with Ghibran