Dev Movie Songs Review Harris is Back With this Refreshing Album, Listen to the Juke Box here 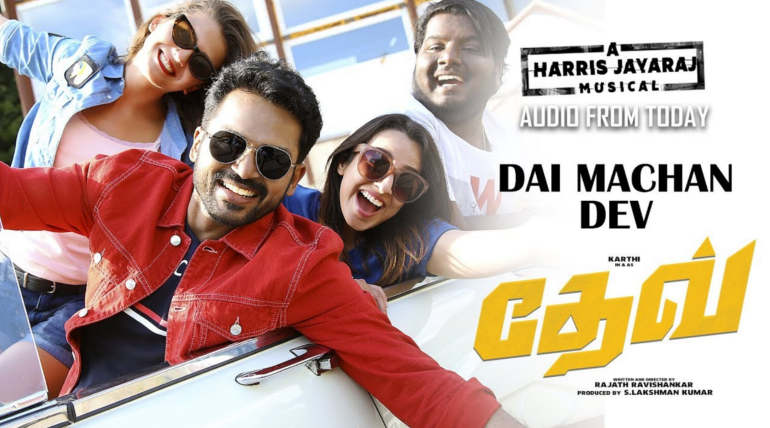 The next big stop for Karthi, Harris fans and movie lovers is the movie Dev which is widely anticipated for many reasons. Actor Karthi after his blockbuster rural outing Kadaikutty Singam is coming with a coming age kind of urban romance drama directed by the debutant Rajath. The actor said a lot about the film in his interviews as a different love story packed with surprises.

Harris Jayaraj who had no releases last year is coming back with a breezy romantic album which is said to have a lot of scoring space for music. The composer saw a dull phase in the past couple of years and is all set to make a comeback now with this highly expected album. The teaser released a while back and got good reception while the film is set to release by early February 2019.

The single Anangae which released recently got an average response and sounded a bit draggy with a long duration yet a refreshing one. Now the album consisting of 5 songs has been released and looks pretty cool. Here are the thoughts about all the songs in Dev album and picks of the album are

The peppy track is a celebration song with switching tunes from Harris and the singers bring variations throughout the refreshing track and the lyric video revealed the feel of the song with visuals and has more to offer when witnessed more than when listened.

The track reminds of the typical Harris fast romance numbers like the Helena in Irumugan from recent times. As always the song sets a perfect mood for a breathtaking romance number with stunning visuals where Karthi and Rakul showed a perfect chemistry together.

A Soothy track with the adoring voice of Sakthishree along with Sathya Prakash is a pleasant piece of work from Harris. A pure track for love with an interluding and lingering backtrack sounds great for a moment and will be repeat-worthy stuff for a long time for sure.

Lyricist: ThaamaraiThe Single released a week back and have said a lot about this ion detailed review here. After multiple hearings, Anangae sung by multiple singers is known to be a collage of the old Harris songs reminding many of the composers' songs.

Dev Movie Songs Review Harris is Back With this Refreshing Album, Listen to the Juke Box here