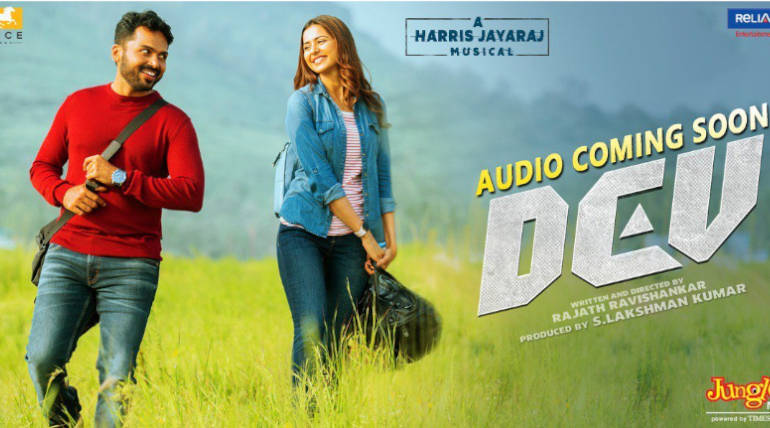 The first single track of the upcoming film Dev starring Karthi and Rakul Preet released a while ago as announced earlier. The peppy track sounds cool with a foot-tapping background theme and catchy lyrics by Thamarai. The song keeps switching its genre each moment and though it looks similar to some old Harris songs, the specificity of Anange is maintained with a new treatment.

With an interluding track and the main theme running behind the song, Anange aka Cheliya (in Telugu dub) gives a typical Harris feel throughout. The lengthy track kept repeating the chorus for a certain period which makes it a bit draggy after a while. But keeping the Composer's previous few films in mind, this one gives a promising feel for a perfect comeback from Harris.

The track looks inspired from the pattern of Michael Jackson's Billie Jeans and gave a fresh feel-good song voiced by 7 singers for this single track. Singers Hariharan, Barath sunder, Tippu, Krish, Christopher, Arjun shandy and Sharanya Gopinath lent their voice for this 6-minute track. Though it had the usually felt Harris touches then and there, the new age flavor and switching scores will make it find a spot in the playlist.

Dev movie is directed by debutant Rajath starring Karthik, Rakul Preet Singh in lead roles and Prakash Raj, Ramya Krishnan in supporting roles and produced by Prince Pictures. The teaser of the film released last month and looked appealing and created a buzz for the film. It is expected to hit the screens by early 2019 in Tamil and Telugu simultaneously.