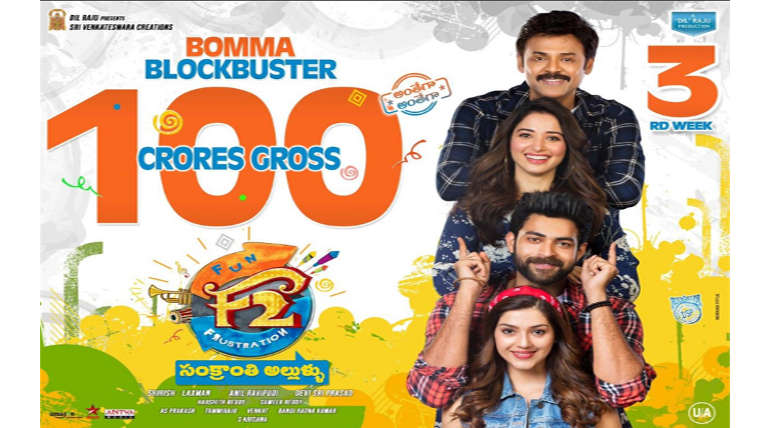 F2 :  Fun and Frustration, a romantic comedy film running successfully in theaters. The recent reports announced that the movie now entered the Rs 100 crore club. The film released on January 12 as Mahasankaranti Celebration.

F2 â€“ Fun and Frustration is also have a recent runin overseas and unstoppable at the worldwide box office. Director Anil Ravipudi tweeted to express his joy on the movie success. He shared a poster, and tweeted, "It's a big day for me.. and my teamâ€¦.. Thank you so much.. Each and everyone.. For your love and Support.

at the US box office the Dil Raju production already crossed $1.5 million and is now marching towards $2 million mark. By the sixth day of its theatrical release, F2 emerged as a great profitable venture for its distributors.

Soon after the success of F2 â€“ Fun and Frustration, Anil Ravipudi,the director of the movie recently announced a sequel to the movie, titled F3. The movie starring Venkatesh, Tamannaah, Varun Tej and Mehreen Pirzada in lead roles. The music of the movie is Devi Sri Prasad.