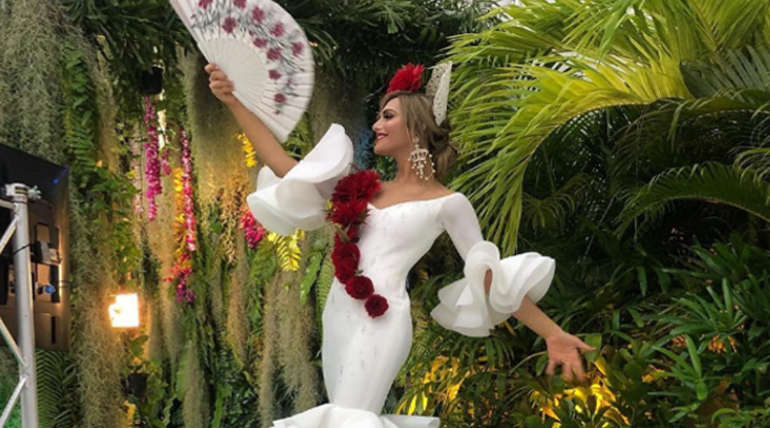 Angela Ponce was the representative for Spain in the Miss Universe that took place on December 16, in which Ponce stood out among many others, not only for its beauty but for the great message it left to the world.

"This is for you, for those who have no visibility, no voice, because we all deserve a world of respect, inclusion, and freedom," Ponce wrote on Instagram on Friday. "And today I am here, proudly representing my nation, all women and human rights."

Although she did not wear the crown, she made history for the first time in the beauty pageant, being the first transgender woman to participate in one of the most important events in the world.

Now, the candidate caused controversy in social networks for her particular dress, which caused thousands of comments on the Internet, where the transparency of the dress managed to affect many.

Ponce wore a dress in silver tones and with some transparencies. The piece was made by Gionni Straccia , one of the most important designers in the world, who has received hundreds of criticisms for dressing the controversial contestant.

"For a long time those were things I always wanted to do," Ponce told Miss Universe organizers. "I put so much focus into it, that in the end, it became a reality."

My National Costume in Miss Universe is a traditional Spanish "bata de cola". This is an iconic piece in Spain, also known all over the world; it is a precious reference of my country. To make this wonderful National Costume, @luisfernandezdisenador was inspired by a number of things. The first one being the white villages of Andalusia, since we wanted to honor where I come from (Seville). The white of the villages, of purity... White representing peace, the peace that I bring as my message hand and hand with equality, respect, inclusion and love. A white 'bata de cola' that crosses a river of beautiful red carnations made by @hatsbyroiz. Secondly we had the carnations as inspiration because they are the most typical and recognizable flower of my beautiful country. For that reason I wanted this flower and its color because it represents the love that, as Miss Universe Spain 2018, I'm transmitting to the whole world. That is the motivate behind a river of red carnations shaped around my head and body, almost as a Spanish flag. As complements, I carried a fan to expand the scent of our land, a beautiful tortoise-shell & Swarovski clip that crowns my head as Miss Universe Spain 2018.

Get to know Miss Universe Spain 2018 and her journey to the crown.#MissUniverse airs LIVE Dec 16 at 7pm ET from Bangkok, Thailand only on @FOXtv. Who will take home the crown? pic.twitter.com/JplBvuBPs8