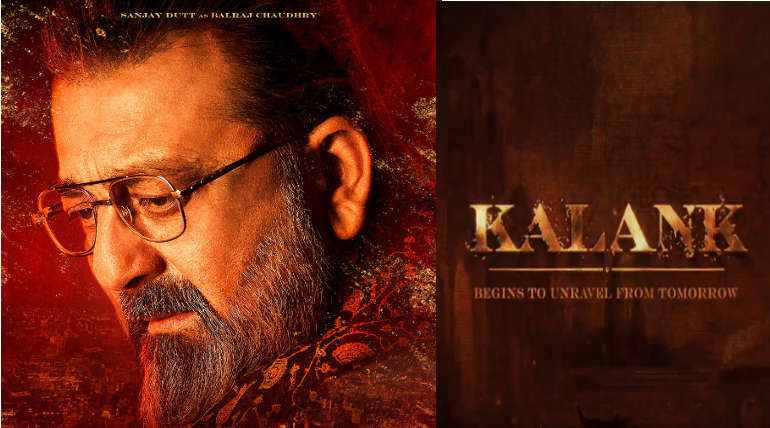 After Varun Dhawan and Aditya Roy Kapur, the first look poster of the third person of Kalank, Sanjay Dutt, has been revealed now. The character name is Balraj Chaudhry, Sanjay Dutt looks like someone who, despite being in more power, at the same time, he is a down to earth and respectable,compassinote human being.

Sharing Sanjayâ€™s character poster, Karan Johar tweeted as, "The most powerful voice of the table, the formidable Balraj Chaudhry. â€ Alia Bhatt described Dutt's character as, "If #Kalank was a kingdom, he would be king! Presenting Balraj". Sanjay on his Twitter, "Humbled to play a magnificent character in this magnum opus. Here's Balraj".

Karan Johar shared about the journey of Kalank on Wednesday as he shared the first poster of the film featuring Alia Bhatt and Varun Dhawan, Along with it, he tweeted an emotional note which says,"A film that was born in my heart and mind 15 years agoâ€¦.a film I passionately believe inâ€¦the last film my father worked on before he left usâ€¦.it was his dream to see this film come throughâ€¦.I couldnâ€™t fulfil his dream thenâ€¦.my spirit was brokenâ€¦.but today his wish has found a relationship with celluloidâ€¦.the story of turbulent relationships and eternal love has found a voiceâ€¦.the film has been woven,nurtured and visualised by ABHISHEK VARMANâ€¦.and the film Is KALANK!"