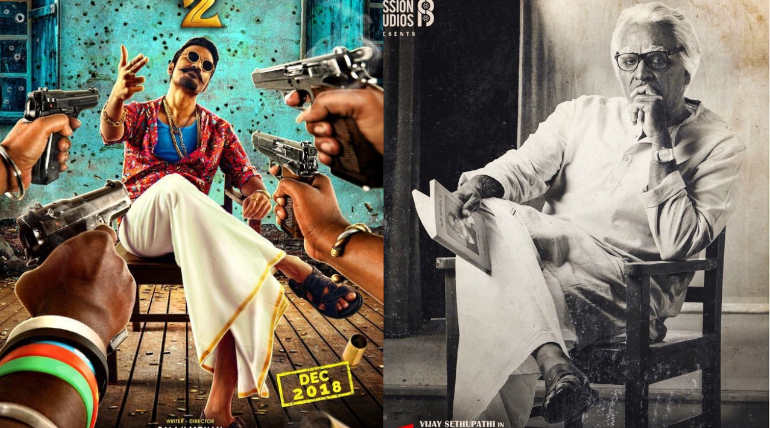 Maari 2 vs Seethakathi , Official Posters of the films

The upcoming Christmas Weekend will see a crowded Kollywood Box office, as 5 expected Tamil films are clashing on the same date worldwide. Tamilnadu has an approximate of 1000 screens across the state as estimated to play new releasing movies. After the clash between 96, Ratsasan and Nota had a big clash last month, this will be a huge clash that even a film with big names can go unnoticed in the crowd.

Amidst of all the confusions of getting enough screens and publicity among audience post-release, here is the expectation meter for each of these films among the audience. The films are ranked as per their popularity level and preference of audience to watch it irrespective of the reviews. These may vary in coming days post-release after the word of mouth starts playing a crucial role for the films. The opening day projections of TN box office is projected taking the screen count, expectations for the film and the clash factor in mind.

Vijay Sethpathi starrer Seethakaathi is the star's 25th film and it widely expected with a promising expectation on the film. It has a silent following for the release without much noise as the trailer showed some vibes of a classical film coming the way. It is releasing a day before all other films on December 20 and might stand a chance to get the best opening for a Vijay Sethupathi film.

Dhanush's next big film had a sudden rise in expectation after the release of the trailer. The first part had a huge opening and received negative reviews from the critics falling as an average venture. The trailer built a different appeal on the sequel and everything will be depending on the packaging in the film. Single screens will prefer this sequel as it has some anticipations among the masses.

The action thriller of Jayam Ravi playing as a cop had a massive curiosity when announced while the multiple release announcements have definitely reduced the spotlight of this film. The movie though has got the pulling factor with an appealing genre and Jayam Ravi starrer film will have the next preference after the biggies.

The Sports drama starring Aishwarya Rajesh in lead role looked promising to deliver inspirational stuff. Actor Sivakarthikeyan is producing the film and also plays a cameo role in Kanaa which also stars Sathyaraj in supporting role. Word of mouth will be the key role for this film as it got a strong chance to fire a small sensation with an inspirational word of mouth.

Vishnu Vishal's masala entertainer is also a crowd puller under certain circle in terms of the commercial audience preference for the weekend. Though it might not get an opening on par with the other releases, the entertainment factor in it can help to pull the audience to theatres. Oviya has done a guest appearance in the film co-starring Regina Cassandra, Karunakaran.

Among all these films the opening day figures in Tamilnadu would mostly come in the ranked order too. As all these films come under the tier 2 and 3 leagues, it doesn't have much competition in markets outer to Tamilnadu except Seethakaathi and Maari 2. Kerala, Karnataka and overseas markets like the U.S, Malaysia, UAE will offer big bucks for these films and the word of mouth will be the game changer here.