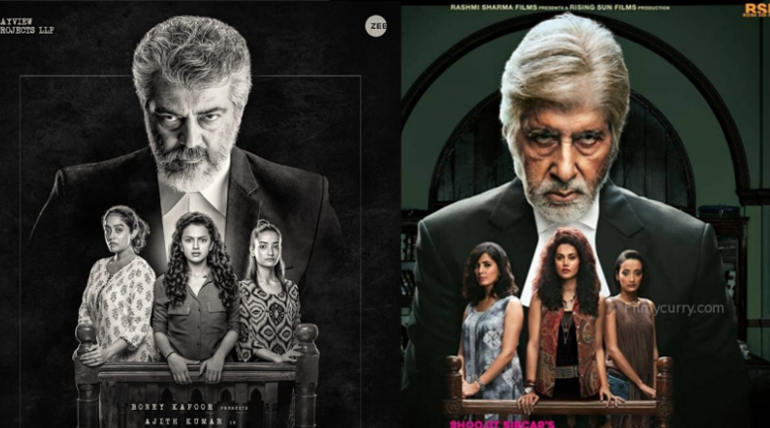 Without much noise for announcements and updates, team Thala 59 has made their entry with a bang on title and first look poster for the upcoming official Tamil remake of Pink starring Ajith Kumar in the lead role titles as Ner Konda Paarvai. While it was an unbelievable rumour when reports were spreading about Thala doing Pink remake, now after the announcement and poster release Kollywood is excited about the biggie doing a film such a classy social film surrounding the three female leads.

The First look poster was a recreation of the exact poster of the original Hindi film Pink. This merely revealed that the film will be one such interpretation of the film without affecting the core of the story. Both the posters were almost similar while Ner Konda Paarvai was in black and white look.

Taking the three girls, the way they look through the eyes has a difference that can be noticed as Shradhha who is playing the role of Tapsee has a more curious look while Tapsee didn't reveal so much emotion and looked straight forward, The other two girls had the same difference in looks with more intensity and the Tamil poster was completely dark backgrounded while the Hindi poster was made in a courtroom background.

Thala Ajith's getup is designed as an aged advocate but a little younger compared to Amithab Bachchan's role. Salt and pepper shade in hair and a composed look with fierce on eyes, Ajith looks classy in the poster of Ner Konda Paarvai. After all the commercial outings in recent times, Ajith has taken up this game-changing project as a biggie and all eyes are on the film which is expected to hit the screens on May 1.