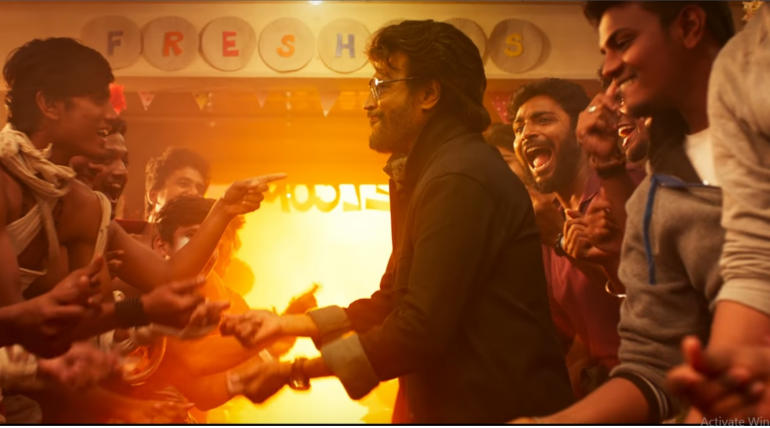 The fresh combo of Rajinikanth - Karthik Subbaraj has blown a storm across Kollywood fans as the young and talented maker has given some fantastic films and his combination with Superstar was eagerly looked forward by the audience. Did the film meet the huge expectations set by the teaser and trailer? Read the review here to know more about the film without any spoilers.

The film starts with a high voltage sequence and gets building up for the character Kaali and the mystery hiding behind him. Kaali is a crazy man with a fiery side inside him entering as a hostel warden and the attitude of the man makes the audience go crazy with stylish mannerisms of Rajinikanth. Though the ensemble star cast in the film hasn't got much to do with their role, Karthik Subbaraj has set a high sequence for each of the characters except for Trisha.

The energy with which the film started with Thalaivar intro is maintained throughout the first half filled with comedy, romance, action, mystery and some mass set pieces. Anirudh has made justice to the chance to score for Superstar and set the screens on fire with his grooving theme throughout. Comparing to the highly energetic first half, the second half is a bit let down post the flashback portion.

The build-up set for the character Kaali is well justified in the flash back and there is nothing to as for, more than this for a Thalaivar fan. The lengthy pre climax portion is the only portion where audience feel disconnected due to the lack of engaging factors. But the maker sums it up with an energetic ending with his touch in storytelling. If the previous films of the director can be said as a pure Karthik Subbaraj film, Petta can be said as a Superstar film perfectly helmed by Subbaraj.

Vijay Sethupathi is one who seems to have compromised much with the screen time he appears which is very less comparing to his stardom. Bobby Simha has some meaty screen time in the initial portions but slowly gets away from the film. But each of the actors made their finest contribution to their roles and Nawazuddin Siddique proves why he is the don of dons onscreen. A single sequence Nawaz is enough to show the power of the character Singaar Singh that makes the theater erupt like anything.

Simran is unarguably the ever young lady of Kollywood as she looks more blossoming than the flowers near her in the film. Cinematography, Stunt, Choreography and all other technical departments have done their parts perfectly and the styling of Rajinikanth can easily be said as the best look for him in the decade. Though the story hasn't got much bigger than a regular revenge saga, the way Karthik presented it is amazing by capturing moments in each and every sequence.

With some most powerful references of Thalaivar himself placed then and there, fans are pulled to the nostalgia and it is more right to say it as a tribute by the actor for his fans by entertaining them. Overall, Petta has almost delivered the promised content with a lot of Rajinism in a modern making style. Audience can enter the theater with a dance and leave by same moves as the foot-tapping Marana Mass number plays for end card too.

Verdict: Petta is purely an entertaining drama filled with Rajinism and is sure to satisfy everyone (ignoring a little disengagement in second half). Watch out for how the film is made surrounding Kaali (Rajini) in a more appealing way than the current mass commercial formula.