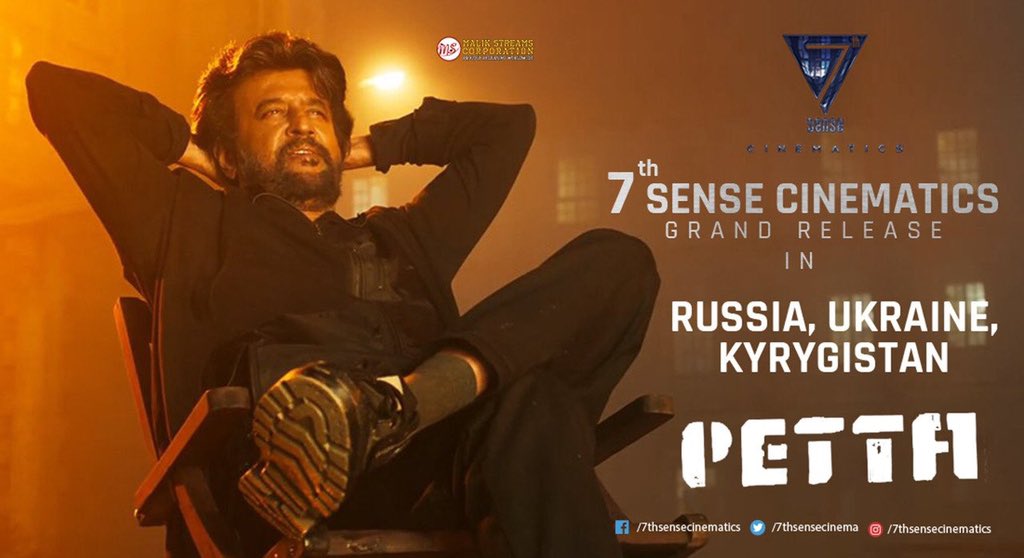 Not only in native language, the most awaiting Tamil movie, Petta rocks in other Indian languages online booking, like in Telugu, Kannada, and Hindi. As so far today, the reservation in overseas theatres is also almost filling up especially in US, Canada, Singapore, and Malaysia.

Rajinikanth, Vijay Sethupathi, Sasikumar, Simran, Bobby Simha, and Trisha are in the cast of Karthiksubbraj's directorial movie. In the role of 'Kali', Rajinikanth will sure steal the show. It seems Vijay Sethupathi acted in the role of 'Jithe' as the villain. The film announced to release on January 10, USA Premieres on January 9th. The overseas distributor of Petta confirms that the film will release worldwide on 11th of January.

Anirudh music is also added credits to be a big hit with the songs and trailers released and the film's business is getting better. 7th Sense Cinematics has announced that the film will be released in Russia, Ukraine and more than the Tamil films released so far.

In their twitter page @7thSenseCinema," We are proud to release Superstar #Rajinikanth's #Petta in Russia, Ukraine & Kyrgyzstan in a huge number of cities never before for a Tamil film". This is the third time Rajinikanth film release in Russia and Ukraine. Earlier, 2.0 was reported to be released in the number of screens in overseas and the news is currently in the trend. Prior to that, Rajini's kaala, 2.0 and Vijay's Sarkar were released in Russia.