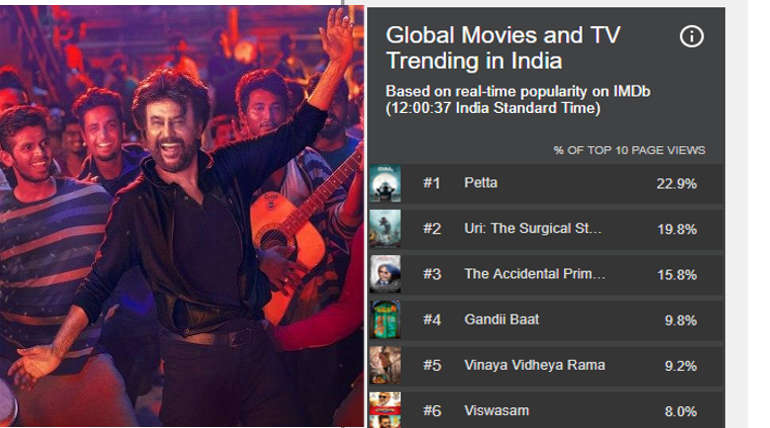 It's very clear audience completely enjoying the Rajinikanth- starrer Petta which released on January 10 all over the world. Rajinikanth in Vintage look of 80 and 90's extremely mesmerized the viewers. The people of all age group thoroughly enjoyed the movie.

Especially for Rajinikanth fans, its a holiday treat as Karthik Subburaj bring back the Thalaivar style back, that's what a fan expects to be. Petta is simply a classic Rajinikanth movie ,for his fans,that they should not be miss. It clearly showed in trending number one in IMDB list.

IMDB is an online famous database of information regarding films,television, internet streams and video games. In that, Petta is trending number one still from its release and URI, an Bollywood movie stands second and The accidental prime minster, an biographical film based on Mayank tewari book on next. Both of the films released yesterday. Petta with a vote percentage of 22.9 with a huge difference between other movies.