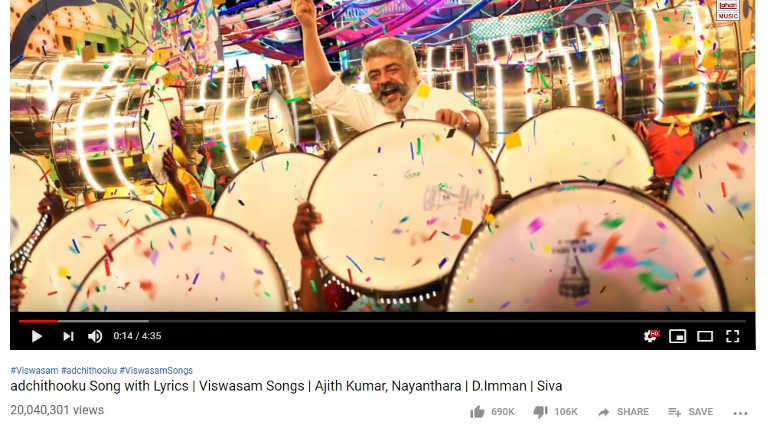 The viral song from Viswasam Adchithooku is raging the YouTube with a record number of views and likes from the release time and making much noise in the online platform. The song featuring Thala Ajith is making the theater atmosphere electrifying and so is the online atmosphere as it is breaking records on its way by gaining a record number of views and likes on YouTube.

The lyric video of the song has garnered 20 million views so far on YouTube with 690k likes so far in the platform. It is currently the second most liked lyric video behind Simaatangaran from Sarkar movie and racing towards the top views and likes among Tamil movie lyric videos.

The movie is having a sensational run at the box office and is widely liked by fans and family audience for the mass rural content played by Thala. The movie is all set to be the first 100 crore movie in Tamil Nadu for Ajith and is expected to end up a blockbuster while completing the theatrical run. The song showed Ajith in an energetic way where he performs hard to entertain fans with his foot tapping moves.