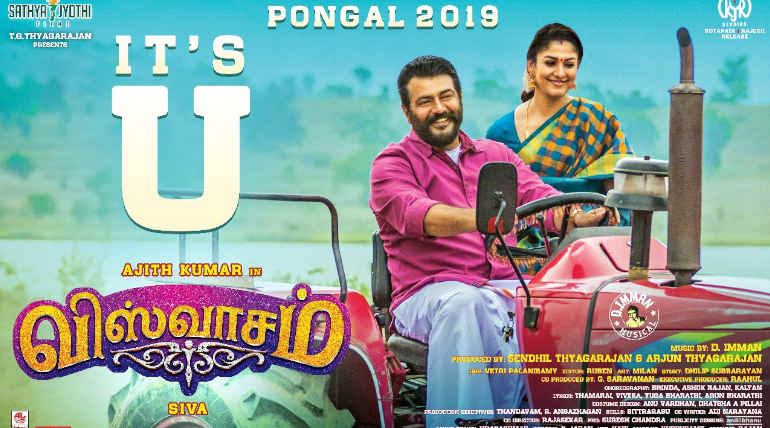 Thala Ajith's next most expected film Viswasam is getting ready for a massive Pongal release and the film has finally cleared the censor process right back. The team officially announced the censor update as it is certified as U and is suitable to be watched by the audience of all age category.

The production house Sathya Jyothi Films tweeted "#Viswasam will be a 'U'niversal Family Entertainer. #ViswasamCensoredU #ViswasamPongal2019". Followed by them, TN distributors of the film KJR Studios tweeted the same information along with a news poster featuring Ajith Kumar and Nayanthara.

The release of the film is once again confirmed for Pongal festival and like never before, a biggie film is still moving without the release of a teaser with two weeks more for the movie release. Fans are eagerly waiting to witness a glimpse of the film while the team is playing a silent game without much updates and promotions. The film has been confirmed to release on January 10, 2019, as of now.

As per the inside sources, the teaser is almost ready and will take just a few more days to present it to the audience. New Year day is being considered for the teaser release while the change of plans might happen depending on the makers' decision. The film is ready to clash with another biggie Petta which trailer is also expected to drop on the same New Year day and kick-start the clashing moments.