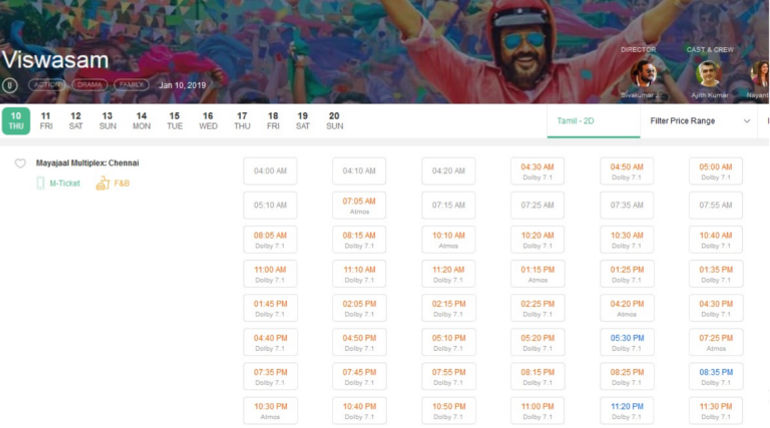 The much-awaited booking for Viswasam in Mayajaal multiplex has started and the shows are already oranged in just a few minutes after opened. Thala Ajith always gets a huge number of shows in the plexes in Chennai and especially in Mayajaal. The theater just started its booking for the film with increasing shows each minute and it is getting sold out the moment it is opened.

The show count currently stands at 55 as of now and most of them are sold out while the rest are filling fast. The show counts might get increased even more as the shows are selling out like anything. Thala Ajith always gets triple-digit show count in Mayajaal and this time it is Superstar Rajinikanth's Petta which is restricting Ajith film by holding half of the screens. Click here to book Viswasam tickets at Mayajaal Multiples and for other screens in Chennai too.

Both the films are getting an almost equal share of screens in the state while Petta is having an upper hand in markets outer from Tamil Nadu. In TN Viswasam is making a storm with its advance bookings starting one by one and getting sold out soon. Viswasam is said to be starting by a possibly early show of 1 am in TN while Petta is expected to start by 4 am for FDFS.