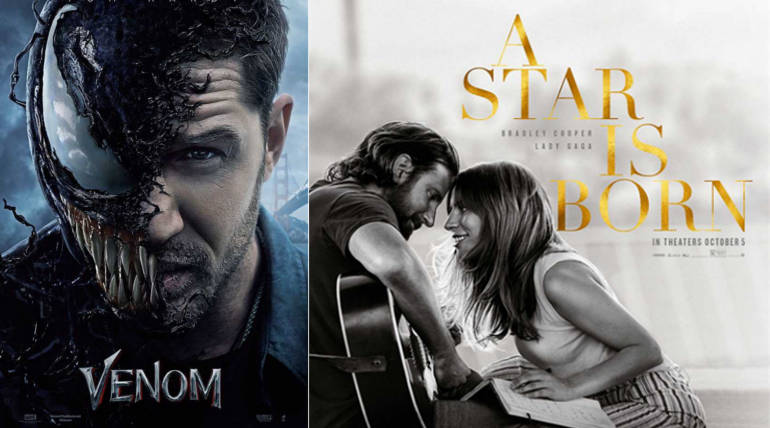 Sony Pictures’ Venom is facing a yet to face a stiff competition from the Warner Bros’ big release A Star is Born which marks the directorial debut of Actor Bradley Cooper. The Lady Gaga and Bradley Cooper starrer film A Star is Born got highly positive reviews from the festival screenings and also highly hoped for getting an Oscar nomination for the year.

Venom starring Tom Hardy is getting a mixed response from the critics after the early screenings. Spin-off film from the Spiderman’s symbiotic villainous character is set to make the lead role in Venom played by Tom Hardy and the film is highly expected for the anti-hero character and a racy dark thriller that is expected to stand out from a usual Marvel film while getting PG-13 rating was a disappointment for fans though.

Bradley Cooper’s much anticipated directorial venture and the third adaptation of the musical romance drama A Star is Born also stars the rock star Lady Gaga in the lead role along with Bradley. The highly acclaimed film is being raved even before its release, hitting in 3500 locs this weekend and expected to collect $30 million at the domestic box office over the weekend and also have a potential to gross over $40 million if the hype goes further beyond the current level.

Venom is releasing in over 4250 locs and the projections come around $55 million for the weekend figures while the gross might go from $65 to $70 million, with a little more push in the domestic box office for the three day weekend. Both the movies are launching with a balanced hype and have the potential to withstand with a good word. Venom is having a worldwide release on the same day while the Lady Gaga starrer melodrama is having various dates for other key markets.