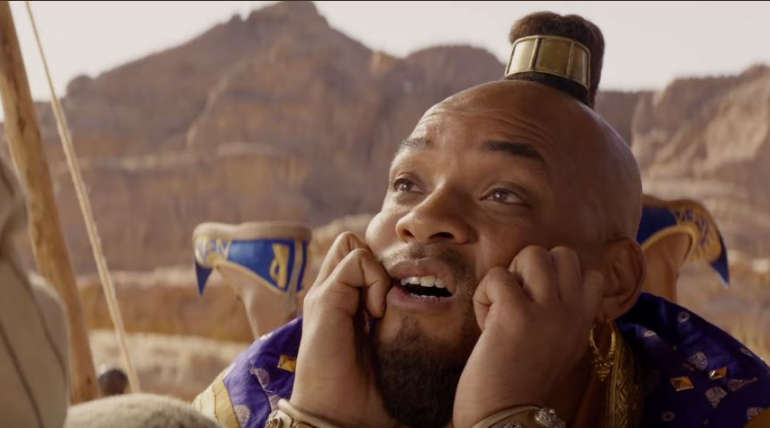 Will Smith in Aladdin Trailer. Screenshot

After a first breakthrough that did not convince some viewers, Disney shared on Tuesday on social networks a new trailer of "Aladdin" that reconquered the public and confirmed that the new adaptation with characters of flesh and blood directed by  Guy Ritchie will be true to the classic of 1992.

Many of the scenes of the trailer, two minutes long, are exact to the animated version. The video begins with a sequence in which Aladdin appears, played by Mena Massoud, fleeing the guards through the alleys of the city of Agrabah, after stealing a piece of food.

However, the clip released today by Disney showed that Will Smith will not remain blue throughout the film. A decision that the spectators applauded.In addition, the advances of two of the best known songs of the classic,"A whole new world" (An ideal world) and "Friend Like Me" (There is not such a great genius) that are heard in the new trailer moved to a large part from the audience to his childhood, and the desire to arrive on May 24, day on which the film premieres, increased.

The persecution through the streets of Agrabah; the improved appearance of geniee; the themes of the soundtrack or the irruption of Abu, the monkey of Aladdin, reconquered the audience. But the scene that won the hearts of the audience was  the ride on the magic carpet.

"Do you trust me?" asks Aladdin in the trailer to Princess Jazmin, played by the British actress Naomi Scott. As if it were a question thrown directly by Guy Ritchie to the viewer, the users answered with a blunt "yes!" After the new trailer, the audience again relies on the adaptation with characters of the director's flesh and blood .

The film, one of the most anticipated of this 2019, will hit theaters after "Dumbo" , which premieres on March 29.