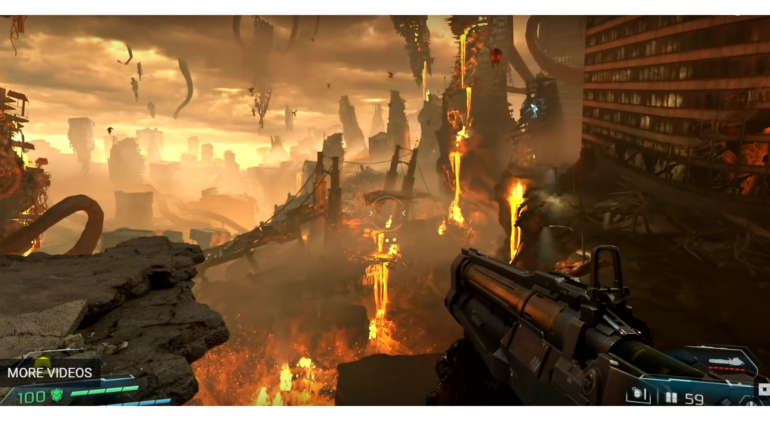 The Reboot of 2016 brutal killer game ‘Doom Eternal’ is back with new features and advanced graphics by their makers id Software along with Bethesda. The game has a huge set of audience for its realistic gameplay and the exciting controls for the gamers making it in a thrilling approach. It involves networked multiplayer game and also the single player mode for the users to play in their desired style.

In the QuakeCon 2018, the makers revealed the extensive gameplay of their game on stage and the audience were so excited seeing the new gameplay of Doom. The Doom Slayer is promised to be a strong badass hero as seen in the trailer with an additional sword attached in the left hand to rip apart the enemies into pieces and go through their blood. New weapons like Ballista has been added in the latest version that makes an explosive bolt to spear the demons.

The Gameplay starts with the view of Doom Slayer looking at his helmet and wearing it, seeing his new feature of the sword and getting ready for the mission.

Stepping into the land, the world is burning and ripped apart while the monsters are having their time around the buildings.

Our hero starts the mission of destroying the baddies from small to huge monsters, swiping off their heads one by one shown in a mind-blowing graphics.

Weapons like a holder-mounted flamethrower, rocket launcher, sniper-rile, and grenade launchers are equipped with the player.

Grapples and power punches are seen to be available to perform and improve the action scenes in the gameplay.

The Game will be officially launched in 2019 and will be available for PlayStation4, Xbox One and PC after the official launch and fans are waiting to experience the new sequel of the master of killers Doom.