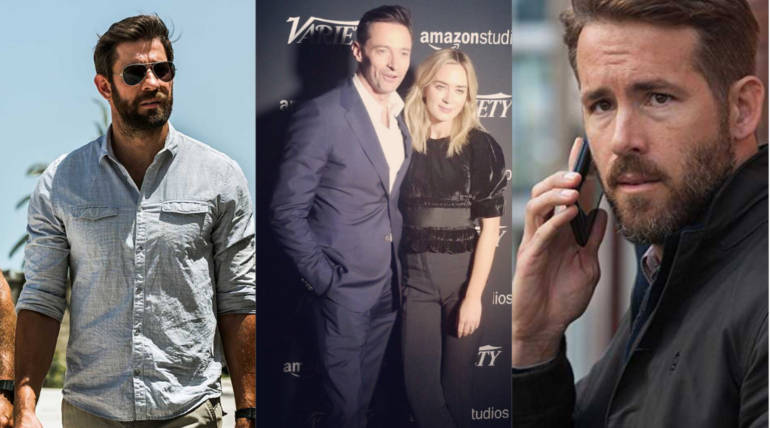 The recent feud on Twitter between Hugh Jackman and Ryan Reynolds, John Krasinski is making some publicity rounds at Hollywood. Whether the incident is for fun or a real spat, but people are enjoying the timely fight between the celebs and Hugh Jackman has opened up about the incident for the first time in the event of Santa Barbara International Film Festival.

Hugh Jackman posted a picture from the Actors on Actors event by the Variety along with Emily Blunt where they both took part together. John Krasinski, husband of Emily Blunt replied to his tweet with another picture from the spot where Hugh Jackman was seen having a close moment with Emily at the red carpet and John commented that Don't make me think I can hurt you in his tweet.

Ryan Reynolds joined the party by replying for Krasinki's tweet saying This is a call to action. This man must be stopped. It is to be noted that Ryan has already bothered Jackman last year with his tweet over the Beijing visit of the actor for Logan promotions.

During the recent Santa Barbara International Film Festival when Hugh Jackman was honored, he used the stage and spoke about the issue. He said You gotta stay on your toes John, That's all I'm saying. He also revealed that he would be fine to take on John saying I'm fine to fight John, but he arrived this morning at my front door with Ryan and I'm like, Come on guys one at a time, Not together.

The mister nice guy image is over, said the star who is promoting his upcoming film Frontrunner which is a biopic of the American Senator Gary Hart. The film is having a wide release on November 21, 2018, and already got some festival vibes around the film in early screenings.