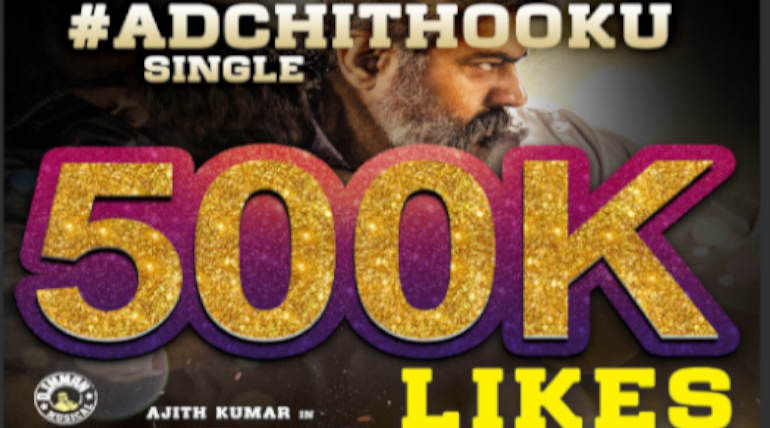 The fourth collaborative film of actor Ajith Kumar and director Siva is the upcoming film Viswasam produced by Sathya Jyothi films. The movie is confirmed to release for Pongal 2019, meanwhile, the first single of the film Adchithooku released on Monday evening. The song right from the release ruled all the social media trendlist and now the lyric video has created a new record in YouTube.

The song Adchithooku which is said to be the intro song of Ajith in the film released online by Monday evening at 7 p.m. and started making records with the number of views and likes for a lyric video. Now the recent record made by the song is that the lyric video has garnered 500K likes in YouTube in less than 20 hours of release beating the previous best record held by Sarkar. The real-time views and likes count were updated by Lahari Music through Twitter.

The video is trending top in YouTube and has recorded 4.6 million views in real time so far. Music director D.Imman has composed and sung the song along with Aditya Gadhavi, Narayanan. The folk number is the talk of the town in social media and is sure to be a treat for Ajith fans in theatres after the combo gave multiple celebration songs in Veeram and Vedalam.

Viswasam will officially clash with Superstar Rajinikanth's film Petta which has an ensemble star cast including Vijay Sethupathi, Bollywood actor Nawazuddin Siddique and directed by Kartik Subbaraj. It is been a long while since Kollywood saw such a big clash and the release date of Viswasam has been locked for January 10 according to sources while Petta is looking for a right date in the festival weekend.