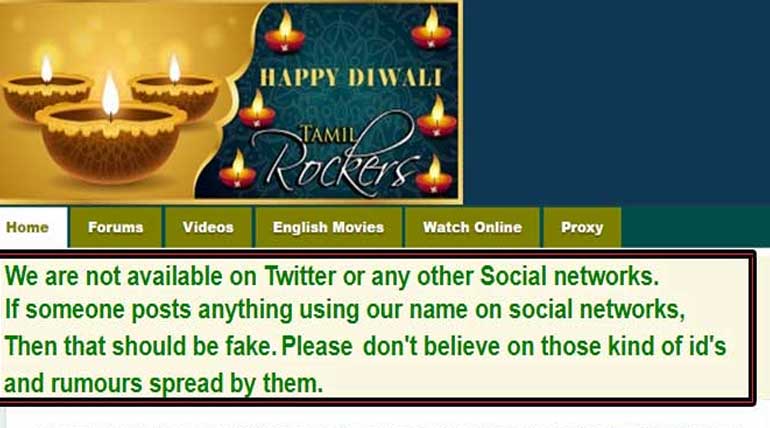 Tamilrockers is the top dominating piracy website in India which releases new films in their website. The recent activities of the piracy site in social media seem to have triggered the media and cine fraternity. But the website have officially clarified about the incident, saying that they are not present in social media and all accounts with their names are fake accounts.

Tamilrockers is famous for its timely release of new movies in their site before other sites. Most of the people from film industry and common audience think that the website are having international link to get the pirated copy of films. But the fact is, it is the local sellers who shoot and sell them the pirated content from theatres. It is also speculated that even some producers in film industry influence and support the website to leak the new releasing films for personal reasons and money.

Earlier two guys who were working with tamilrockers was interviewed by a media and more shocking facts came to the light. The hosts for the website exist in multiple countries and hard to shut them down. Though the South Indian producers council try hard to catch them or block their site, they remain strong by changing domains periodically and hard to be shutdown completely.

Few days back, an unofficial twitter page of Tamilrockers announced that they are going to release Rajinikanth's 2.0 movie before it's release. However in the homepage of their recent website, they have displayed a message warning the users not to believe any fake posts from any account. This is what their message says:

"We are not available on Twitter or any other Social networks. If someone posts anything using our name on social networks, Then that should be fake. Please don't believe on those kind of id's and rumours spread by them."