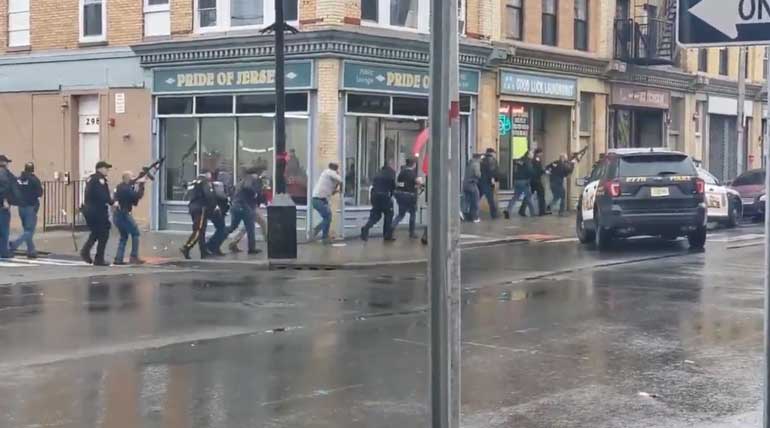 100 bullets fired in Jersey killing six including one detective and three civilians and the two suspects: Tuesday, December 10 was a nightmare for many people at 12:30 PM when a suspected couple opened fire inside the Jersey city, Kosher Supermarket on Martin Luther King Drive.

The shootout lasted for hours, with more than 100 bullets fired. The alleged couple killed three civilians and wounded two police officers before getting killed by the police. It was not all, and already the couple had murdered a famous detective who tried to catch them on a murder charge.

New Jersey shoot out started when Detective Joseph Seals spotted a couple suspected to be part of a livery driver murder case in Bayonne. As Seals approached the U-Haul truck, the suspects a male and a female got out of the van and shot him point-blank.

They then rushed with the truck to the supermarket for more killings. Joseph Seals is a famous Jersey detective for the past for more than 13 years.  Micheal Kelly, the Jersey city police chief said, he is survived by five children and was confirmed dead while preventing the bad guys.

Steve Fulop, the Jersey City mayor, said that the supermarket shooting lasted for many hours and killed three civilians. Three Chasidic Jews were injured, and two police officers were hit by one of the 100 more bullets fired. They were released from the hospital now after the treatment of their injuries. SWAT teams and FBI agents rushed to the site and cordoned off the area. Churches and schools were locked out of fear of any untoward incidents.

President Trump has tweeted that our thoughts are with the victims and families. Also, he had confirmed continuous monitoring of the horrific shoot out the situation in Jersey City in New Jersey.

As of November 14, more than 366 people have been killed in America due to shootouts in 2019 alone. With these six people, including a famous detective, the tally goes to 372.  Americans only hope that it does not increase further with only less than 20 days to end in 2019.