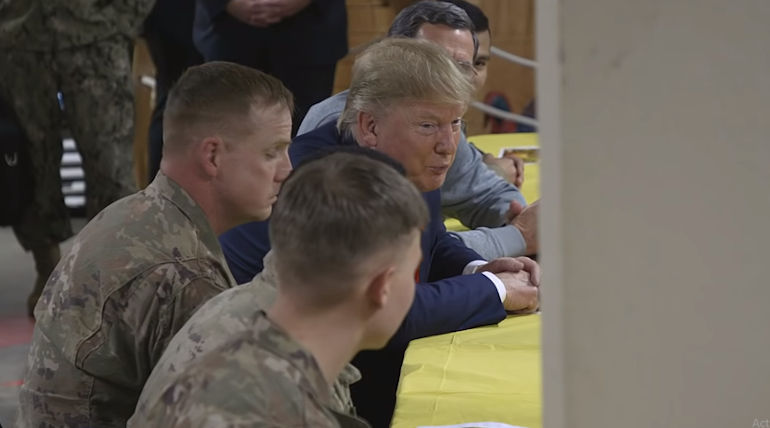 Is Trump's thanksgiving visit to Afghanistan to divert impeachment investigation?

Suddenly out of the blue, President Trump took off at 7:20 PM on November 27, 2019, to have dinner with the American troops in Afghanistan. The reporters were allowed to report the trip only after him boarding the plane back to America at 2 PM on November 28. It is the first visit by Trump to Afghanistan and second to a war zone after a similar visit to Iraq during Christmas last year. But observers feel that it could be one of Trump's diversion tactics from the impeachment investigation.

On November 27, Trump was enjoying Thanksgiving holidays at his Mar-a-Lago estate in Florida. Suddenly at 7:20 PM, he started with a few top aides to Afghanistan. Not many knew about, and they were also barred from reporting on his visit to a dangerous war zone. Sixteen hours later, the Air Force one plane landed at Bagram Air Base at 8:33 PM local time. Along with the pitch-black darkness, everything of Trump's visit was kept in secrecy.

He was accompanied by White House Chief of Staff Mick Mulvaney, NSA Robert O'Brien, Senator John Barrasso, a Wyoming Republican, among others. He was received by the chairman of the Joint Chiefs of Staff, General Mark Milley. Trump passed the turkey and mashed potatoes to the two dozen American troops while having dinner with them.

He spent more than three hours with them and boarded 747 back to America. The reporters accompanying him were only allowed to inform of his visit at 2 PM on 28 November. But some British media reported about his flight passing through their clear skies before that.

The war zone visit of Trump is being observed as a tactic by some of his detractors to divert attention from the fastening impeachment investigation. After the week off due to the Thanksgiving holidays, the House Judiciary Committee will hold a hearing to decide whether to move forward with an impeachment vote.

Also, the White House is to decide on the testimony of Trump next week. Being in the center of an impeachment investigation, Trump may be using the Afghan war zone trip as a means of distraction is what detractors say about it.