A giant Planet Around a Dwarf Star 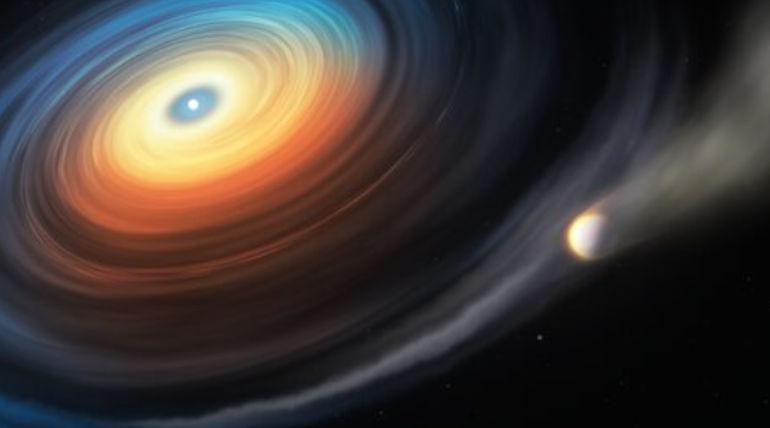 A giant Planet Around a Dwarf Star. Image Credit: ESO

A huge planet around a tiny little dwarf star has been found by the group of scientists in the United Kingdom. The white Dwarf Star was given name as WDJ0914+1914. It is four times greater than the size of Earth in terms of diameter and has been one of the greatest inventions in space history said by Boris GÃ¤nsicke, a researcher from the University of Warwick revealed in his article named 'Nature,' which has been published today.

According to the inspections done by his team, it was located 1500 light-years from constellation Cancer and produced a scorching heat of around 49,500Â° Fahrenheit (appx. 25,000Â° Celcius), i.e., Five times hotter than Sun. It also emits a vaporized material from the planet, which comes around 260 million tons per day. As per the reports retrieved from Sloan Digital Sky Survey, there is around 7000 white dwarf and will undergo a star transition once in a while. This Gargantuan planet is one of them.

The detailed analysis is going on in the Chilean â€“ Atacama Desert with a highly equipped X â€“ Shooter instrument developed by European Southern Observatory (ESO). They have also confirmed that the traces of chemical substances like Sulphur and an array of gases such as Hydrogen and Oxygen are found.

The reason for the survival of this huge planet from different transitions is mainly due to its constant Gravitational Interactions with other planets in the Universe. The outer layer of the planet is Large and Icy, which is in contrast to the stellar heat produced inside it.

Matthias Schreiber, a research scientist from the University of Valparaiso in Chile, has addressed that, "It's hard to analyze about various chemical reactions and evaporation in the disc of gas that occurs prominently throughout the planet." It has been evident that the extreme UV rays and high energy photons are being emitted during frequent intervals. It also opens the gateway for many astrological discoveries in the future, he added.

A giant Planet Around a Dwarf Star