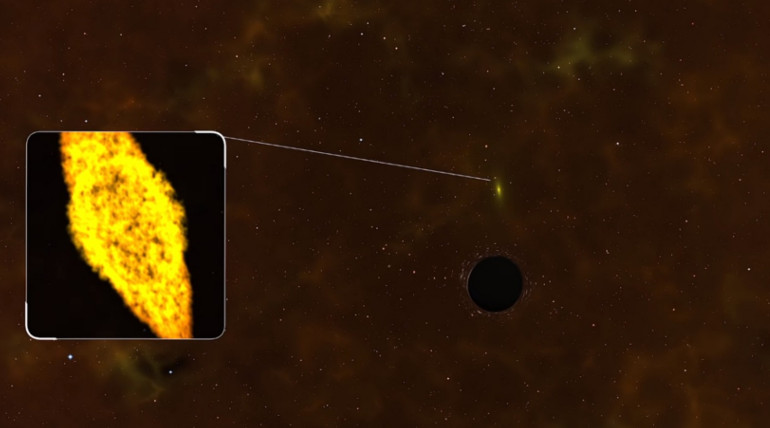 Black Hole in Action; a Sun-Like Star has been Shred Down by a Massive Black Hole. - Image Source: NASA Goddard

Astrophysicists have recently witnessed a distant star torn apart by a monstrous Black Hole. As per the paper published in the Astrophysical Journal, the destruction happened in a galaxy lying at a distance of 375 million light-years.

The destructing cosmic event has been classified as the Tidal Disruption Event, simply known as TDE. Thomas Holoien, a Carnegie Institution for Scienceâ€™s scientist, with his team has turned their head to NASAâ€™s TESS, the Transiting Exoplanet Survey Satellite, right after they discovered the disruption through All-Sky Automated Survey for Supernovae.

As per the scientist, they headed to TESS as they wished to see the brightening of the dying star despite their discovery was first happened with the ASAS-SN. The scientist stated that the star was pulled too close to that Black Hole so it doesnâ€™t stand a chance to stay away from the destruction.

That enormous gravitational pull of the Black Hole managed to pull and tore down that Sun-sized star and left some fireworks for us to show up in the TESS. Those fireworks are ultimately the so-called TDE, said the scientist.

The TDE is nothing but a gravitational force of a Black Hole that shreds a star and forms a bright disk around it with stellar dust and hot gas from shredded materials of the star. Especially, this event happens when a star ventures too close to a Black Hole in the centre of a galaxy. If the work of this black hole could be visualized, then it would be like the Gargantua Black Hole from the movie Interstellar.

This cosmic event has been named as ASASSN-19bt by the discovered team. Holoien said that it was the first TDE event caught of the TESS. The Carnegie Institutionâ€™s scientist stated that his team had observed everything from this TDE blast; from TDE's rising temperature, brightness and the cooling. They hope that their data could help future researchers who are about to understand the Black Holes with more precision.

The All-Sky Automated Survey for Supernovae is a network of automated satellites posted at Earthâ€™s poles to search especially for supernovas. They are capable of surveying the entire sky around the year as they are programmed. The ASASSN has marked its one-thousandth supernovae discovery back in June 2019.