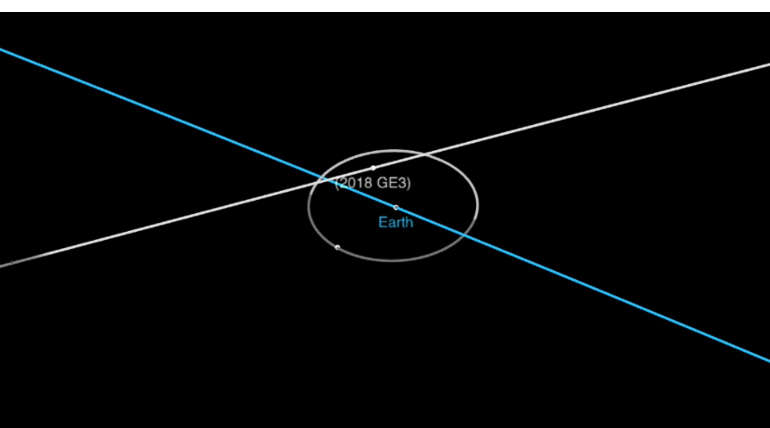 The people of Earth were not even get notified about warehouse sized Astroid that passed the Earth in the range of half the distance of the Moon on Sunday.

This is the unnoticed closest asteroid approach to the Earth ever. An Asteroid named GE3-2018 that in the size of 110 meters wide had just made a close call to earth on Sunday early morning around 2.41 am EST. The Asteroid passed the earth at the distance of 119,500 miles in the speed of 66,174 miles per hour. Anyway, it is a close call but it had made any minor contact with the Earth's surface than it will be more painful to read this story that explains the deaths and destructions.

However, this Astroid just passed away but had insisted us upon the memories of Chelyabinsk event. Around 1500 people of Chelyabinsk in Russia ware admitted to the hospital for minor injuries that caused by shuttered glass pieces when a medium-sized asteroid that exploded over the city in 2013.

This GE3 is much bigger than that of 2013 asteroid but was first observed by the Catalina Sky Survey few hours before passing the earth. According to a report, an asteroid may be broken into pieces while entering the earth atmosphere but this size asteroids won't do so. This sized Astroid may make some regional damage according to its speed, angle and impact location. Hardly astroids try to make a surprise visit to earth sometime.

Now recently NASA had released a chart of NEOs that are in a position to pass the earth in future using the CNEOs software. But there is still two-third population of those NEO's are yet to be found. NASA is now working on a project NEOcam, a camera that could hunt the NEOs before approaching the earth.

NASA also said that after the GE3 passed the earth it had made a closer buzz to the Moon, that was even closer to the moon than the earth.

According to some data, scientists have found nearly 26 of enormous impacts of asteroids since 2000. Those are considered to be more similar to the explosion of Atomic Bomb.