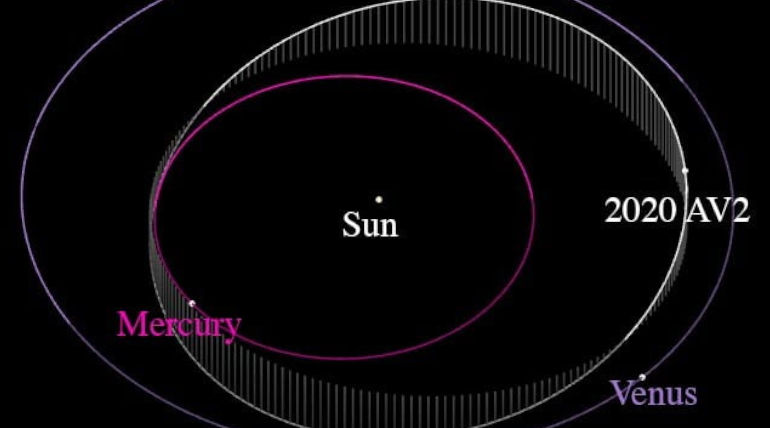 Nature unleashes many things- Asteroids orbiting inside Venus found for the first time: Asteroids are the celestial bodies in the space, and most of the asteroids in our solar system orbit around the asteroid belt, which is found between Mars and Jupiter. The asteroids also orbit in a cluster in the same orbit of Jupiter called Trojans. The astronomers found these as the regular orbit of asteroids.

Yes, there are asteroids that come close to the earth, and they are called near-earth asteroids. But the astronomers are taken by awe to see for the first time an asteroid is orbiting entirely inside Venus. Astronomers from Caltech's Zwicky Transient Facility (ZTF) found 2020 AV2, a small class asteroid which comes in the family Atira is found to orbit entirely inside Venus. Usually, Atira family orbits within the earth except for 2020 AV2.

"The discovery is really exciting," said Quanzhi Ye, a visiting assistant research scientist at the University of Maryland Department of Astronomy and ZTF Co-investigator. "Since the 1970s and 1980s, astronomers are researching the skies for small bodies, and it is to be told that there are no frontiers uncovered in the inner solar system.

Asteroids orbiting inside Venus is a real challenge to see and super thrilled to find one," averred Qanzhi ye. 2020 AV2 is 1-3 kilometers wide and slightly tilted while orbiting compared to its peers and entirely inside Venus. It is expected the asteroid may come close to Mercury at some points. One of the shortest years it had compared to other asteroids in the solar system completing to orbit around the sun in 151 days.

Astronomers believe that an encounter with the planet flung the asteroid apart. 2020 AV2 would have encountered and flung to the Venus orbit. Astronomers also opined that it must be the rough journey for the asteroid. Getting past the orbit of Venus is the real challenge for the asteroid, and therefore the future looks intimidating. The only way the 2020 AV2 gets rid of the orbit is to get gravitated to Venus or Mercury and get flung, but more likely, it will end up crashing with one of the planets.