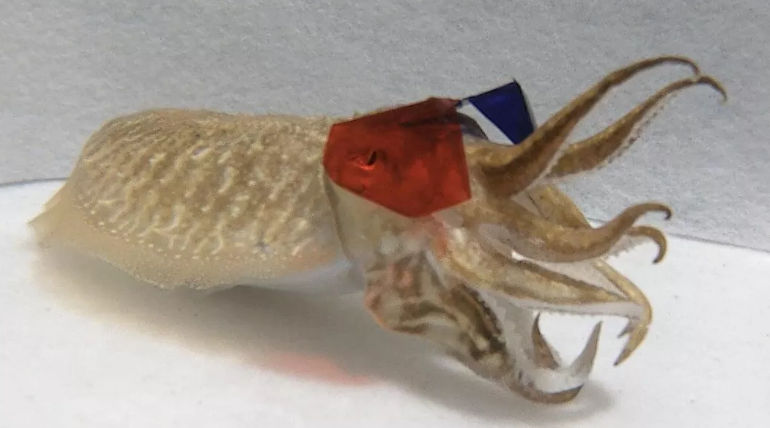 In a bid to see how they see and react scientists put 3D glasses on a cuttlefish: A team of scientists recently put on a pair of 3D glasses on cuttlefish only to get a glimpse of their respective ability to watch a 3D movie besides understanding how they would react to the same. Through the experiment, the scientists learned that the cuttlefish could view and react to 3D movies in the same manner as they would react to living creatures in the deep ocean. The group of scientists, through the experiment, also concluded that the respective species of fish are more than just perfect and proficient in-depth perception. The findings of the research study were published in journal Science Advances research recently.

One of the researchers who is associated with the study shared with a media organization that in a bid to understand how the concept of 3D vision works on the cuttlefish, special eyewear of red and blue hue was designed and used. Super glue Velcro was used on the skin of the cuttlefish. The 3D glasses were fastened on the skin of the fish. While one had a red filtered lens, the other had a blue filtered lens. A researcher who is involved with the study admitted that it was not an easy task to ensure that the fish wore the glasses on for the experiment. However, after a lot of trying, the cuttlefish did use the eyewear, and from then on, there was no looking back for the team, and the study progressed as per the plan.

For the experiment, the group of researchers chose to use shrimp, which is one of the most loved snacks of cuttlefish. A video of shrimps was used. The cuttlefish had their glasses on, and in front of the tank on screen, a video of the shrimp was played. What followed not only surprised the team of researchers but also left them in awe. The cuttlefish involved in the experiment reacted in the same manner as they would while they are hunting for prey in the sea. Mistaking the shrimp in the video for real-life ones, the cuttlefish let out their tentacles and, without waiting any time, began literally attacking the animated on-screen prey.

The team of researchers from the University of Minnesota dived deeper into the research study. During summer, the group of researchers visited the Marine Biological Laboratory in Woods Hole, Massachusetts, with the aim of testing and understanding how as many as 11 varieties of cuttlefish reacted to animated videos in a tank.