Evidence of Water found in Ultima Thule Beyond Orbit of Neptune 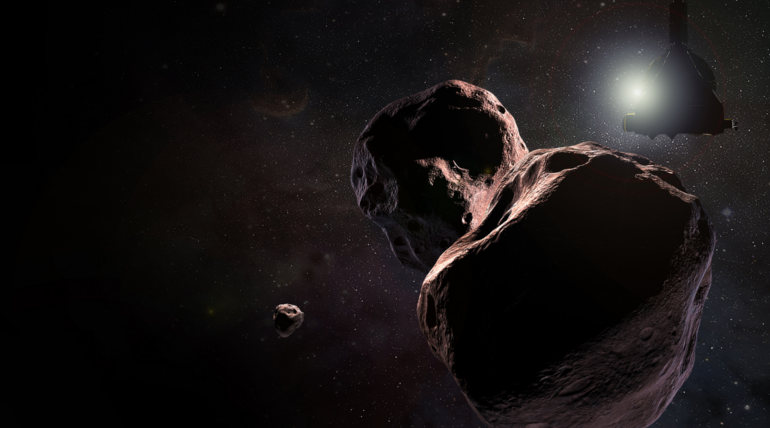 NASA has found evidence of a unique mixture of methanol, water and organic molecules on Ultima Thule's surface. Ultima Thule is located in the Kuiper Belt beyond the orbit of Neptune. It is also called a Contact Binary. Contact Binary is a small Solar System body that has a minor planet or comet and composed of two bodies that have gravitated toward each other until they touch. This results in bilobated, peanut-like shape. Ultima Thule measures approximately 30 kilometres in diameter and is irregularly shaped.

The features of this planet include bright spots, hills, craters, and pits. The biggest depression in the Ultima Thule is 5 miles in diameter and named as Maryland Crater. It has a bright red hue and the cause may be changed in the organic materials on its surface. Ultima Thule belongs to the class of Kuiper belt objects called the Cold Classics. They have almost circular objects and low inclinations to the solar plane. Besides, it has not been perturbed since its formation, most probably 4.6 billion years.

New Horizons, the spacecraft of NASA led us to this amazing tiny planet under the program New Frontiers Program. It was launched in 2006 and the Primary aim was to perform a flyby study of the Pluto System and the secondary aim was to study the Kuiper belt objects for over a decade. This spacecraft is the fifth one to achieve the escape velocity to leave the Solar System after Pioneer 10 and 11 and Voyager 1 and 2.

Evidence of Water found in Ultima Thule Beyond Orbit of Neptune