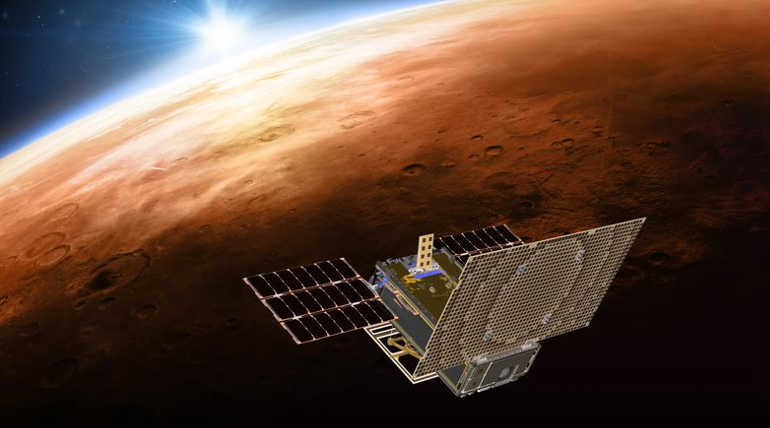 CubeSats are one of the hopefull inventions of the 21st century. Apart from normal satellites that are big as a school bus, these CubeSats are literally only 10 centimeters in size saves a lot of time and money.

Since now the CubeSats are used to probe the earth around its Low earth orbit. But now the engineers of NASA had made two briefcase-size CubeSats to probe Mars.

The project is officially named as MarCo(Mars Cube One) and the two CubeSats are named as Marco-A and Marco-B that are an identical twin. The space agency believes that if the mission succeeds than this CubeSats will be the most relevant relay source to earth from Marse.

Andy Klesh, the chief of the MarCo project said that this CubeSats will use gas propulsion to steer in the Mars orbit where other CubeSats are using electromagnetic steering around the earth.

While thinking about probing the Mars NASA certainly have to think about its extreme danger. However, NASA considers this mission as a demonstration mission. If anything goes wrong than the mission will fall in the line of trial and error method to evolve in future missions to the red planet.

NASA planned to take this identical twins to the Mars Orbit in May 2018 with Atlas V launcher vehicle. The CubeSats will be deployed in the Red Planet's orbit by the launcher and the progress of self-navigation will be initiated by those twins to steer around.

After the deployment, the twins will initially stretch its flat panel antenna and solar panels.

The Chief said these sats will help NASA to rectify the critical touchdowns of the previous mars probs like curiosity, opportunity, etc... in future missions. This is the first and second interplanetary CubeSats of NASA and hence this mission will boost the study of the solar system.

The official name of this twins are MarCo-A and MarCo-B but the engineers who involved in its designing process had nicknamed them as Wall-E and Eva. Two most loved Pixar characters of all time.