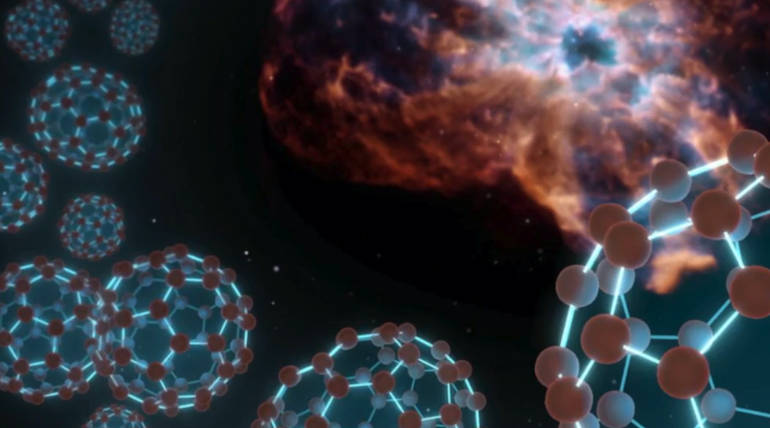 The Researchers from the University of Arizona have proposed a new mechanism for Buckyballs' formation in their study published in Astrophysical Journal Letters. Several years puzzle of the existence of buckyballs ended with its discovery in 1985 in the planetary nebula by Rice University researchers. But the confusion of Carbon 60 existence in the hydrogen-filled environment,  seems to have been now solved by this research. But it opens the floodgates for more researches to find out how truly chemistry works in the space.

Buckyballs, also known as fullerenes, were one among many nanoparticles found in 1985, discovered by three researchers from Rice University named Richard Smalley, Harry Kroto, and Robert Curl. Only after their discovery people who until then thought that the interstellar space was sprinkled only with lightweight molecules came to know about C60 buckyballs.

The name was given after Richard Buckminster Fuller, whose architectural work had many dome structures that looked similar to the composition of C60. But until buckyballs were discovered in space, their formation was only thought to be possible in the lab. But the current research adds a new dimension to the formation of this C60 molecule in the interstellar space.

Jacob Bernal, a chemistry doctoral student at the University of Arizona, was puzzled like the other scientists of how buckyballs of pure carbon can sustain between the hydrogen-filled radiated environment. For every carbon molecule, there are about 10,000 hydrogen molecules in space. And hydrogen has the power to stop buckyballs synthesis, and it is unlikely for 60 carbons to stick together in that vast space. Bernal and other researchers from the University of Arizona and co-authors started to investigate the carbon soccer ball's characteristics.

Experiment with the TEM funded by NASA and National Science Foundation

Bernal and the team found that the Transmission Electron Microscope at the Kulper Materials Imaging and Characterization Facility at the University of Arizona can stimulate the environment of a planetary nebula, in which buckyballs are believed to have formed. The team then partnered with the US department of energy's Argonne National Lab near Chicago.

They used silicon carbide, which is typical from the dust of dying stars in the low-pressure environment of TEM, and was subjected to 1,830 degrees Fahrenheit and irradiated with high energy xenon ions. It was then analyzed in Tuscon with better analytical capabilities and found that the C60 is derived from silicon carbides.

Bernal concluded that the findings of the universe are endless, and where we expect complicated things to end are conditions that create them.