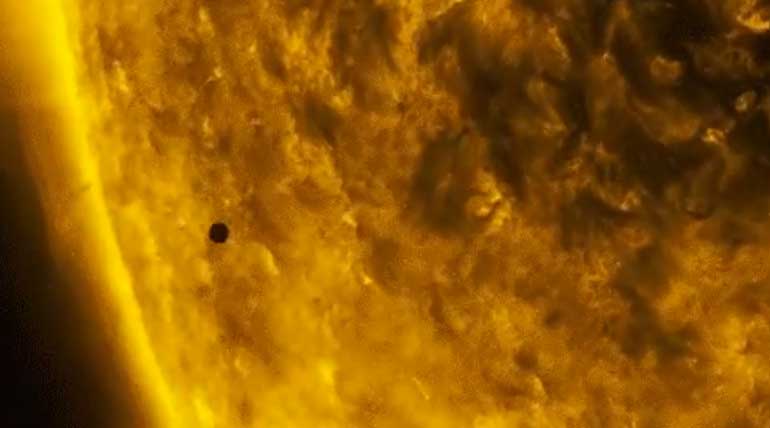 Mercury moving n the sun and earth can be viewed from many countries tomorrow: People in South America, the eastern half of North America, Africa, Europe, and western Asia will witness the mercury planet's transit between the moon and the sun. Missing the opportunity will mean to wait until 2032 to see it again.

For centuries scientists have been trying to calculate the distance from the sun and earth, and it is only the transit of planets Venus and Mercury enabled them to do it. Unlike the rare transit of Venus planet, the smaller Mercury planet does it often, and tomorrow's transit is the 14th in this century.

This transit for a total of 5.5 hours from 7:36 AM to 1:04 PM ET will enable scientists to understand the mercury mysteries.

Transit of Venus and Mercury planets: Only two planets in our solar system can have transits or planets coming between the sun and the earth. For most of the people living now, there is less chance to see the next transit of Venus,  as it is set to occur only in 2117. Venus transits in pairs separated by 121.5 or 105.5 years, with nearly eight years separating each transit.

But tomorrow for many, there is a chance to see the transit of Mercury. In 1769 astronomers finally got to calculate the earth's sun distance using Venus transits and also the size of the solar system. Now for astronomers, tomorrow's Mercury transit may pave the way for its further confirmations and to unlock many mercury mysteries.

How to see Mercury transit tomorrow? Not everyone in the world is privileged enough to watch the Mercury transit for 5.5 hours tomorrow. But even for the few, it is not advisable to see the sun directly or through binoculars and telescopes.

Only telescopes with a solar filter are best to view the mercury transit, which will look like a small black speck passing in front of the sun. Many astronomy clubs will host public viewing, and it is a safe place to watch the rare mercury transit tomorrow.