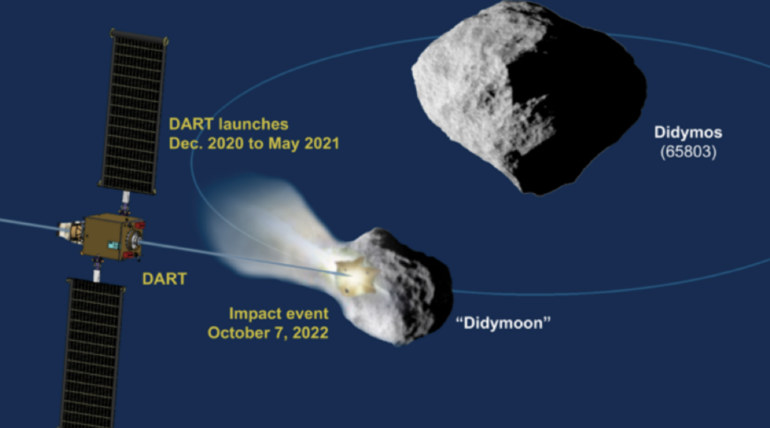 NASA is going to launch a spacecraft named Double Asteroid Redirection Test (DART). It is going to use the Kinetic Impactor technology to chase away an asteroid that is potential to collide with the Earth in the year 2022 and 2024. Thus, the Double Asteroid Redirection Test will determine whether a high-speed collision will give the desired results. Space X will launch the spacecraft to collide into asteroid named Didymos.

It is 400 million miles away from the Earth. It is a binary asteroid that will consist of two bodies. One is named as Didymos A and the other is named as Didymos B. This impactor will reach Didymos B at a speed of 13000 miles per hour. This is the first of its kind and NASA is using a defensive technology to do away a potential asteroid hazard. Among these two asteroids, the first one that is called Didymos A measures 780 meters and Didymos B measures 160 meters.

Our defence weapon will dash the smallest one. The study on this asteroid is going on since 2013. Didymos' composition is the same as the other asteroid but the Didymos B asteroidâ€™s composition is unknown. DART will fly to the asteroid and with the help of APL developed onboard, it will focus to shoot automatically. The spacecraft will strike the asteroid nine times faster than a bullet. Scientists can see the impact in the orbit of the asteroid. This will help them to better determine the effects of the Kinetic impact technique.