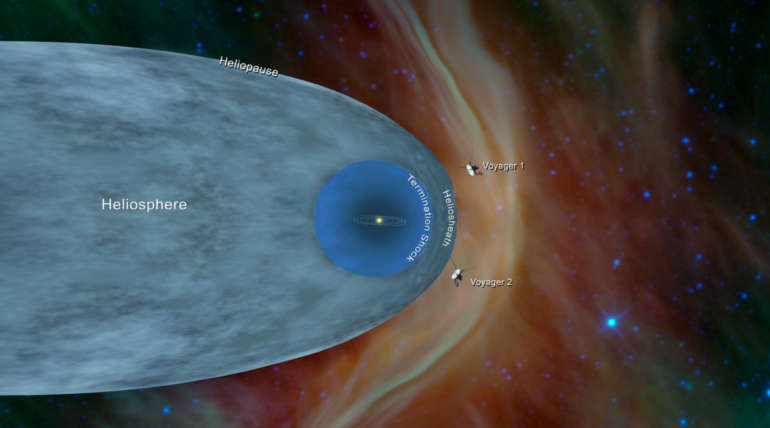 Nasa Voyager 2 probe, the only second human-made object to leave the Solar System has reached the space between stars. Its now exited the heliosphere - vast bubble-like region of magnetic space surrounding and created by the Sun.

Now the spacecraft beyond the outer boundary of the heliosphere, somewhat around 11 billion miles from Earth. Before that Voyager 1, reached the space in 2012.

In a statement released by NASA, shared the additional data from the probe that fives engineers a sense of where the Voyager2 currently is in relation to the solar system.

The data comes from Low Energy Telescope which tracks the solar systems low energy particles. The previous Voyager 1 sent back 2012 farewell, NASA team expects those encounters with low-energy particles to nearly disappear as the probe its exit.

Launched in 1977 from Cape Canaveral, Florida,  Voyager2 probe moving towards the edge of the solar system and its mission is complete once they collect detailed data about Jupiter, Saturn, Uranus and Neptune.

Been there. Done That. Got the poster. Download free print-quality #spaceposters, including this brand-new one celebrating Voyager 2's entry into interstellar space. https://t.co/mfMwuUZRgf pic.twitter.com/jbH5yuLK9S

Grand Tour Encore: Voyager 2, the only spacecraft to have visited Jupiter, Saturn, Uranus and Neptune, has left the Sun's bubble and joined me in interstellar space! https://t.co/2H9qMzogNY pic.twitter.com/dmDdNfbjLp