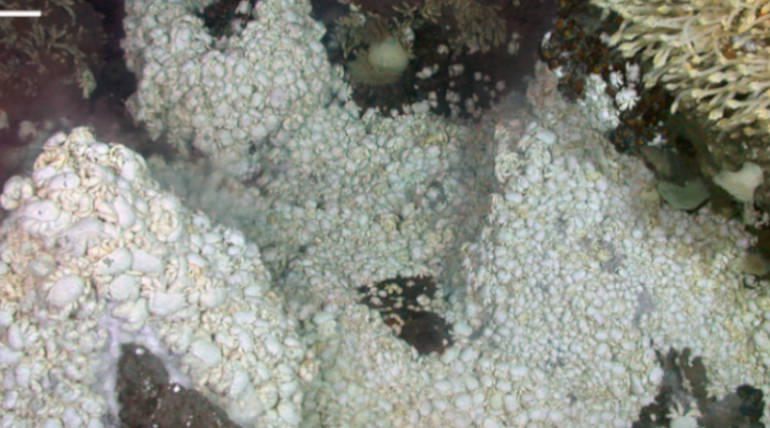 Imagine living in just a narrow band of hot water that surrounds hydrothermal vents in the Antarctic’s Southern Ocean and living on bacteria growing on your own hairy chest. This is how the Kiwa tyleri a newfound crab species lives. In 2010, researchers found the tiny creature clinging onto the sides of the hydrothermal vents in an area of the frigid ocean just to the northeast Antarctic Peninsula. However, they now have officially named as well as describe it in a new study that they published on Wednesday.

Previously scientists referred to this crab as the “Hoff” crab after David Hasselhoff the actor. However, the scientific names given the small crabs, whose shell can grow 2 inches long, honors Paul Tyler a deep-sea biologist, said a colleague and lead author of the study Sven Thatje.

The crab prefers to live in water temperatures of 95 to 104 degrees Fahrenheit but locating water that is that hot is not an easy thing to do. In order to accomplish that, the crab must live very close to the mounts of these hydrothermal vents that spew water out that is as hot as 715 degrees Fahrenheit.

Because of the high pressure and the frigid surrounding water, the temperature drops quickly said Thatje. Therefore the crabs spend their entire lives doing a balancing act because if they push up too close to those vents they will be burned and too far away and they will be frozen.

The K. tyleri feed on mats of bacteria that are found near the vents, which are energized by the compounds that are oxidizing after being spewed onto the seafloor. The crab eats microbes as well that are living on the coat of hair covering their own chests. These crabs as well as other species that are related are known for the hairy appearance they have and therefore are referred colloquially as yeti crabs.