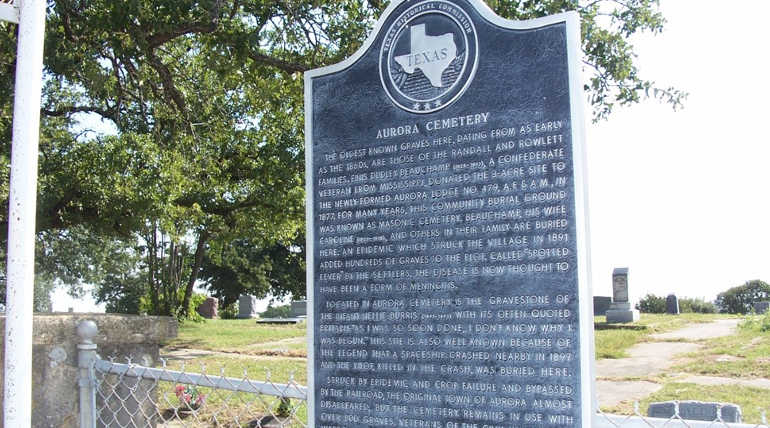 The Aurora alien pilot is one of the many alien mysteries of America that said to be happed back in late 1890's. According to some reports in 1897, a UFO made a crash landing in Aurora with a heavy explosion. Later some countryman of Aurora reached the crashed site and found an alien pilot who passed away in the crash. Some men gathered at the crash site and pulled out the piolet and buried down in the Aurora cemetery. This is the brief story of the Aurora alien mystery.

Almost 120 years have passed since the UFO crash now Kerry Haggard, a vintage car restorer and also a novelist from Aurora who wrote a book about the 1897 incident had made a claiming that the US government had exhumed the buried alien piolet.

According to Kerry Haggard, the incident is not the first occurrence across the United States and this incident had been reported in the Dallas Morning newspaper at that time.

The aurora cemetery is one of the oldest that posses some brave history like civil war martyrs but in the late 1970s a group of international UFO Bureau had appeared to Aurora to exhume the alien pilot but the locals made a strong resistance as they didn't like digging around their loved ones grave in the cemetery. The locals gathered at that time with guns hence the UFO Bureau stepped out from the place. Later some modern techniques like ground penetrating radar to find the grave but nothing gave them a perfect conclusion. Now Kerry Haggard claiming that somehow US government had managed to exhume the alien piolet from the cemetery.

According to the Dallas and Fortworth newspaper records, the incident was witnessed by some early risers of Aurora. They able to witness an alien ship that cruised due north in the early hours of April 17, 1897. Suddenly the ship lost its control and crashed over the windmill tower that stood at the north side of the town. Soon the locals reached there and identified that the piolet is the non-resident of earth and also died in the crash.

The locals gathered and performed the burial of the alien pilot with Christian rites on the very next day. According to the newspapers the town filled with people to witness the crashed site and UFO debris and a person who was known to be T.J.Weems marked as US signal Service Officer and an authority on astronomy said that the pilot was a Martian by citing a paper on the alien person and also said that would be a records of his travel that could not be deciphered.