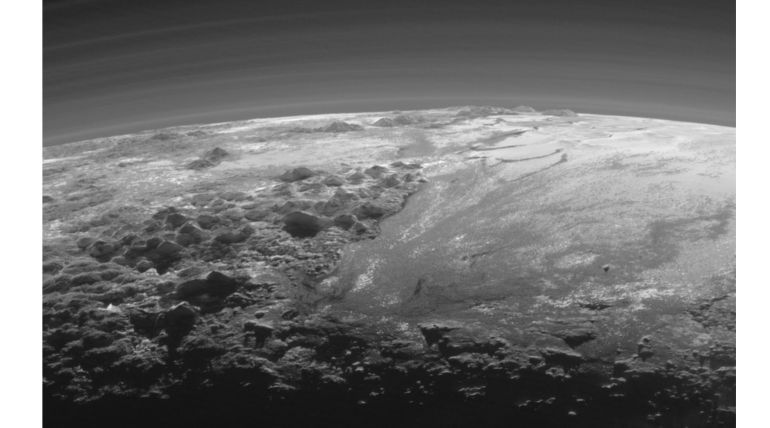 Although Pluto is not a planet, surprising findings in the dwarf planet makes the sky watchers have a soft corner over it and also changed the assumptions and perceptions that Space scientists have on Pluto.

NASA's spacecraft New Horizons discovered dunes in the dwarf planet Pluto made of methane ice, the picture and the scientist's view over it has been published in a reputed science journal recently. Earlier, when the spacecraft passed Pluto in mid of 2015, it had sent the images of icy world surface with dune-like features.  Scientists were surprised about the formation of dunes because the planet's weak atmosphere can't generate dune-building winds.

NASA’s New Horizons spacecraft looked back toward the sun and captured this near-sunset view of the rugged, icy mountains and flat ice plains extending to Pluto’s horizon. The dunes were spread across 75 km and spread like belt below the mountain range and scientists notified the stable condition that indicates its likely formation within 500,000 years time.

Comparing to Earth, Pluto has lower surface pressure up to 100k times and scientists consider it to be the main factor for the gathering of solid methane. Pluto has many such similarities with Earth in its landscape, dunes and more, all though it is far away from the Sun. Not only Earth, dunes can also be seen in Venus, Mars and even in Saturn's natural satellite Titan.

Scientists say that Dunes could be formed even at a little amount of atmosphere with (-230 deg.C) frozen surface temperature conditions and after analysis of the Pluto's dune picture, they concluded that during the conversion of solid nitrogen into gas, methane has become airborne and blown by thermal winds to the mountain bottom.