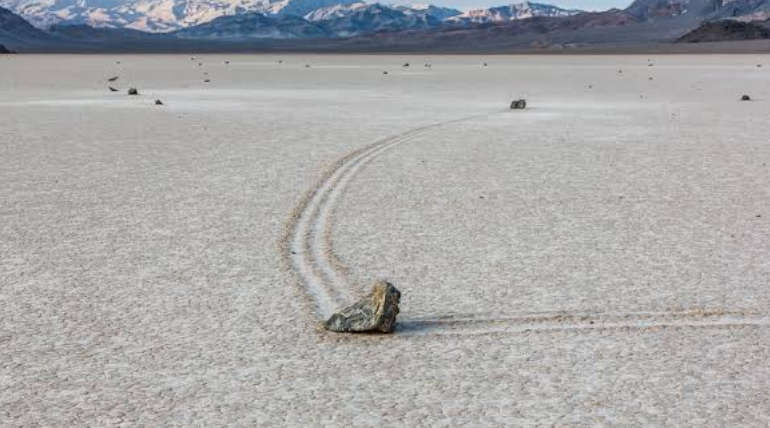 The Evolution of the Sailing Stones: Scientists have confirmed that the Sailing Stones had a long history dated way back 200 million years ago. It has been discovered from the footprints of giant dinosaurs and has been presented at "The American Geophysical Union" by the famous Paleontologist Paul Olsen from Lamont-Doherty Earth Observatory here on December 9, 2019.

The excavated slab has been exhibited at Dinosaur State Park in Connecticut since 1896. They have found that these remains are similar to a Prosauropod family (which is an early Sauropod). This fascinating invention has left the researchers with two possible solutions with respect to their creation. One could be the single-cell microbes, which form a mud mat to preserve the remains for ages, but the fossil has ruled that option out.

Another thing that could change the freezing temperature, which covers the sailing stone with ice and creates a floating layer on top, makes it completely submerged. Also, when the sun comes out, the sloppy nature would allow the stone that weighs around 700 pounds (320kgs) to travel across several distances by the movement of winds.

The ancient fossils slab has a close resemblance to the remains found around the regions of Racetrack Playa, along with uneven textures on it. Thus the rapid cooling in the Tropical parts of the Earth becomes a difficult factor in providing a clear cut analysis regarding this invention.

Around 202 million years ago, the Triassic Extinction event had occurred and reduced 76% percentage of living organisms on earth. Further adding to that, the severe Volcanic Winter has happened, which has reduced the atmospheric temperatures to lower levels.

At last, Olsen and his scientists concluded that the evolution of sailing stone is quite unpredictable and requires more evidence to prove the fact that it is 200 million years old. But one thing for sure, the microbial mat option is not at all true according to the ongoing research, he added.