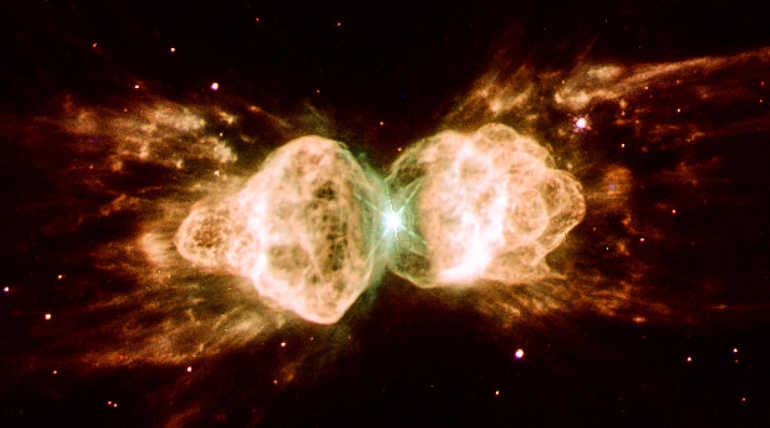 Every star must have to die one day including our sun. But what happens when a star goes off? Space scientists got some peculiar answers for this question.

Herschel Space Observatory of European Space Agency had noticed a rare phenomenon of space that connected to the death of a star. The observatory noticed a rare and unusual laser kept emitting from the Ant Nebula explains that the very heart of the Ant Nebula holds a double star system. Isabel Aleman lead author of this paper published by the ESA said in this case of Ant Nebula it is very hard to spot the object that producing this kind of rare laser into space

This process of rare laser emission will happen only when a star getting its way approaching towards death. Our Sun also has to experience this situation in the future roughly after 10 billion years. Scientists claim that our sun is also a middleweight star when it approaching its death the sun will turn into a dense white dwarf star by shading its nearer surroundings like gases and clouds of dust. This shading effect of sun will be visible across the universe. But according to the Ant Nebula, the scientists are still boggling to find the object that emits the laser from the planetary nebula.

In this case of Ant Nebula, the scientists have observed a dense disc in the centre that its orientation is amplifying the laser signal. Scientists considering that this dwarf could possibly have a companion because it is very hard for a star to shoot out the gases into the orbit unless having a companion to deflect it. They said that it seems the mass from the dying companion star is captured by the central star and forms a disc around it and emitting the rare laser into the space.

The Scientists exclaims that they were not expected this type of rare laser phenomenon as they working on the Herschel only to characterize the gas and dust particles that wandering around some old stars. They consider this laser observation as an unanticipated discovery. Another reason behind their exclamation is that they have observed a very rare type of laser emission called hydrogen recombination line laser emission.

The scientists are believing that this type of observed laser emission could possibly pull down the structural, chemical and physical characteristics of planetary nebulas that are been kept veiled for a long time. Now the team felt that this unexpected discovery could lead them to refine the ideas of stellar evolution