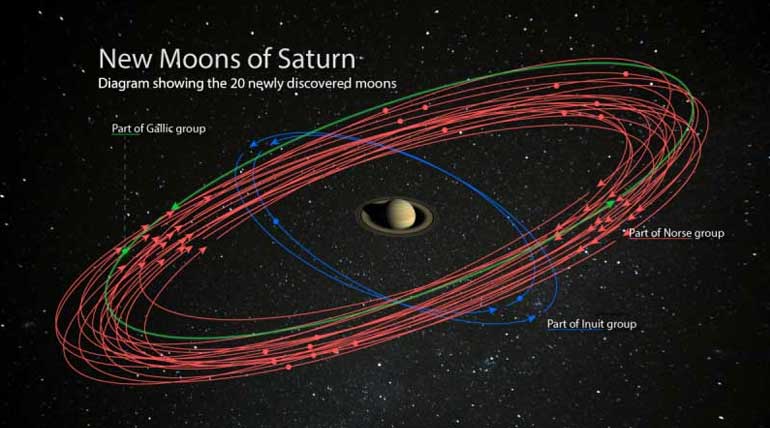 Help astronomers to name the new moons of our solar system.

Astronomers have also found these new moons still donâ€™t beat Jupiterâ€™s title of having a â€œBiggest Moonâ€. Most of the moons that discovered are just 3 miles in diameter while Jupiterâ€™s Ganymede is half the size of the Earth. They have even found a moon that is just a mile wide revolving around the ring planet.

Astronomers are still counting the moons of Saturn as they found it is hard to spot tinier moons without an advanced telescope from the future. They believe that there may be around 100 more tiny moons revolving the planet, said the discovery team. The team used the Subaru Telescope in Hawaii to spot the new moons.

As per the source from the discovery team, 17 of these new moons are rotating in retrograde; they rotate in the opposite direction of the host planetâ€™s rotation. The remaining three are classified as prograde and one among them has around three years as the orbital period around the planet.

The discovery team from the Carnegie Institution for Science, it has planned for a Moon-naming contest as they did for Jubiterâ€™s moon last year. The same team had discovered twelve new moons around Jupiter last year.

Enthusiasts around the globe can now suggest names for the newly found moons of Saturn on Carnegie Institutionâ€™s special twitter account @SaturnLunacy. As per the source, the discovery team has also welcoming artworks related to the discovery on the hashtag #NameSaturnsMoon.

These new moons could be the remnants of Saturn formed over time. Scott Sheppard, the chief of the discovery team said that these moons might have formed from some parent moons around Saturn. Now the team has new hope to understand the origination of the planets of our solar system.

For the enthusiasts who are about to participate in the naming contest, better understand the rules, by the institution, before signing up. The institution is expecting names of mythological giants to suit the Saturnian moons.