Soon Satellites Will Be Dropped In Space With A Taxi 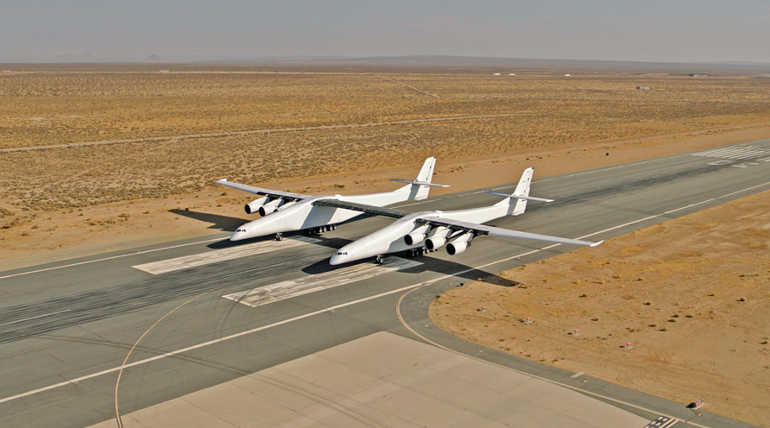 Soon Satellites Will Be Dropped In Space With A Taxi. Image credit: Stratolaunch Syytem Corp

Stratolaunch, if this plane could make the air than the future of aviation will be redefined as the plane wishes to taxi down three rockets at a time.

Stratolaunch is an effortful output of Microsoft co-founder Paul Allan along with Orbit ATK in 2011 in a vision that a plane could make a rocket launch directly from the air. According to the confirmations of the Stratolaunch, the plane is expected to make the flight right in few months.

The Plane is a twin-fuselage aircraft constructed with six 747 Boeing engines with the widest wingspan of 385 ft that stood majestically over the runway with 28 wheels. Previously in December the Stratolaunch had reached the test runway speed of 25 knots and its said to be the plane has reached nearly 74 knots in a recent test run.

The rocket is designed to carry as many as three rockets in a single trip to the stratosphere and drop it there in the height of nearly 30,000 ft and the rocket could fire by its own to start its journey and the plane returns down as the job ends. The Stralaunch is expected to carry nearly 550,000 pounds under its wings hence the plane is considered the largest plane of the earth. Approximately wider than a football field.

The Stratolaunch officials wanted the plane to reach the speed of about 128Km/h and 222Km/h in next test flights as that is considered as the takeoff speed of the plane. As everything goes according to the plane that the plane will be in the air at the end of this spring.

This Stratolaunch will make a huge difference in satellite launching technique even though the idea is not a quiet strang in the aviation history. Previously a small weighed rocket has been tossed into space by the Orbit ATK with Lockheed L-1011. But this largest plane can carry three rockets similarly at a time.

Currently, the firm is about to take the plane for a test flight and it is believed to start its first taxi service in early 2020.

The Stratolaunch initially decided to take up some small weighed rockets that hold the satellites that applicable for military and agricultural purpose. The Stratolaunch also working on its first flight that is done in discount as a startup plan.

Soon Satellites Will Be Dropped In Space With A Taxi