Strange Glowing Triangular UFO Made A Visit To ISS 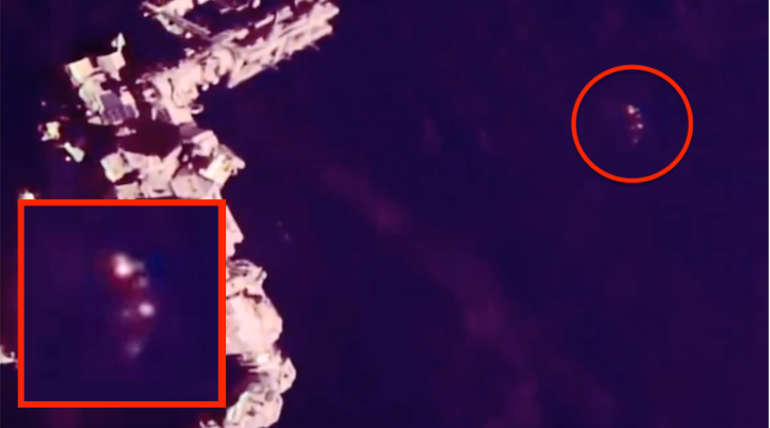 Initially, they have spotted three glowing lights and later with a clear view of the lights divided into 3-4 parts with a flash. Within few seconds an orb-like object approached close to the ISS and then faded out in darkness.

Alian hunters have recorded the live footage and made a video and published on their blogs. The video shows that the object would be about 300 foot wide in size before dividing into parts. It is first huge UFO that approached the International Space Station

Scott C Waring is one of the well known UFO hunters wrote in his blog UFO sightings daily that the object flown close to the ISS is a TR-3B UFO that looks like one of the top-secret military vehicles of United States Air Force(USAF).

The TR-3B is one of the top secret government vehicles. The vehicle is believed to be in a triangular shape and possess the ability to create some anti-gravity force around itself. It is also known as an invisible aircraft that can be deployed for surveillance in any part of the world without detected by any RADAR.

This video by alien hunters are considered to be one in many like this but NASA hasn't spoken any word about the rare sighting of UFO yet. Conspiracy theorists have started questioning NASA and asked the NASA officials to explain that bright object that flown that much closer to the ISS.

Some conspiracy theorists and alien hunters are still complaining NASA for deleting some UFO sighting footages that containing the alien visits to the ISS. Some are still kept warning the government to update the defense system for a future war with aliens.

As previously an astronaut posted a video of UFO sighting from the ISS.  In that video, the Astronaut found three flying objects flying across the space station.

Strange Glowing Triangular UFO Made A Visit To ISS