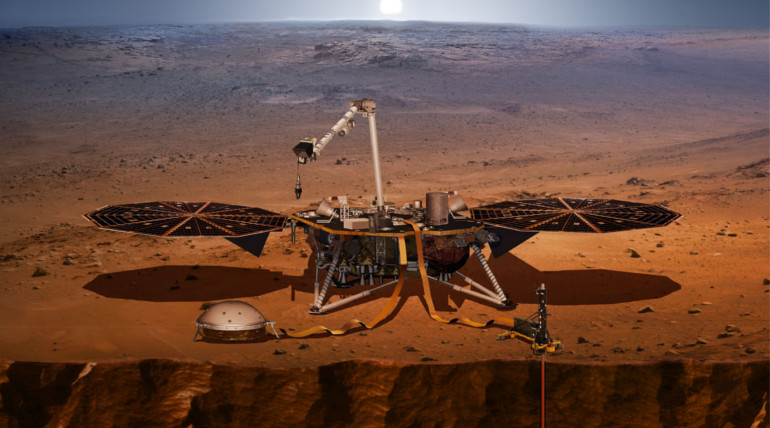 NASA, on Monday, released a couple of audio clips from one of its Mars missions to show how the Marsquakes sounds like. The researchers have released only two selected audio clips from 100 such events that were recorded by NASAâ€™s InSight lander since December 2018. NASA believes that this could boost the curiosity in understanding the red planet.

The InSight is a high-tech robotic lander of NASA that was launched back in 2018. The lander was specially designed with extraordinary ears to record Marsâ€™ seismic activities. The complete expansion of InSight is Interior Exploration using Seismic Investigations, Geodesy and Heat Transport. It is an advanced robotic lander manufactured by Lockheed Martin under the watch of NASAâ€™s Jet propulsion Laboratory.

Most of the landerâ€™s parts were from European agencies. The primary instrument is an advanced seismometer called SEIS (Seismic Experiment for Interior Structure) manufactured by the space agency of the French government, CNES. SEIS is capable of measuring the magnitude of Marsquakes and design a 3D structure of Mars crust from it. This instrument can even record the minute rumbles that are nothing more like breeze.

As per the NASAâ€™s team working with the InSight program, InSight had never picked up a single signal until April 2019 since its landing. It started to pick up the vibrations only after four months from its landing date. Since then, the lander has picked 100 such vibrations. Twenty-One among those vibrations are considerably strong quakes while the remaining vibrations are classified as minor quakes, for now. Yet, those minor vibrations were subjected to other tests to know what was there other than quakes on the red planet.

The team has listened to two rumbles recorded by the lander on May 22 and July 25 of 2019. As these records are far below the human hearing the team has to process the sounds to hear through headphones.

InSightâ€™s team has learned to choose twilight hours of Mars to record the Marsquakes as they found more wind gust during day time that was created by the warm air. As a part of their learning, InSightâ€™s team had found SEIS itself was responsible for some interference, said the team. They classified that mechanical interference as Dinks and Donks. So far now, they reasoned that mechanical interference is because of the heat loss factor of the lander just like a turned-off car engine ticking while cooling.

After hearing the sounds, the analyzed sound waves, NASA concluded that the crust of Mars would be a mix of Earthâ€™s and Moonâ€™s crusts. As said by NASAâ€™s InSight team, upon a quake, water would fill the cracks that left in Earthâ€™s crust with new minerals. If it is the moon, the cracks would be left unsealed as its crust is drier than Earth. Thatâ€™s why the sound waves that are created by a quake will travel in a straight line without any hindrance in Earth while the sound wave in the moon is so scattered and continues to ring for more than ten minutes or so.

Most of the sound waves that were recorded on Mars continued to rumble for almost a minute to conclude that its crust is a mix of Earth and Moon.

On Tuesday, NASAâ€™s chief has announced that they are close to announcing about â€œlife on Marsâ€. The announcement has sent a big curiosity across the nation. While Space X and NASA seem to be in a race to colonize Mars, these sounds delivered by InSight arrived as valuable data for the contestants.

Here is the audio clip that was delivered by the lander,