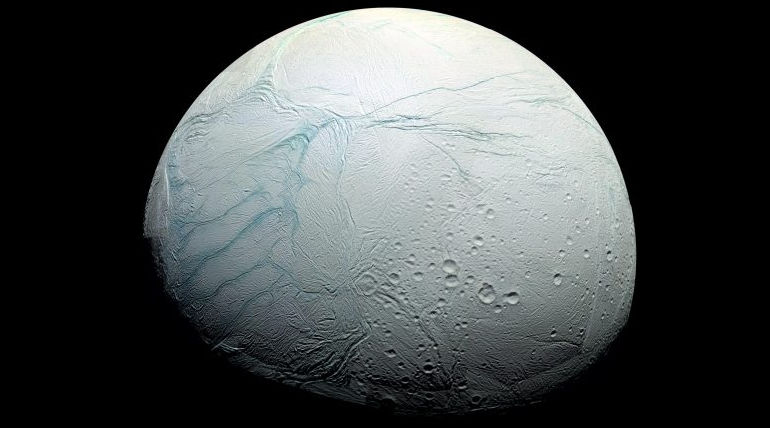 Know how Saturn's moon Enceladus erupt water through fissures known as Tiger Stripes: Nearly after 15 years of Cassini mission found four parallel linear fissures around the Saturn's moon Enceladus, only now the scientists know the cause for it. Enceladus has been in the scientists' lookout from 1981 when the Voyager II passed through it. Now the study published on the 10 December Nature Astronomy journal finds the reason for the mysterious four fissures known as Tiger Stripes. NASA and US National Science Foundation-supported study done by Carnegie Institute of Science found that water also erupts through the four fissures in Enceladus.

Doug Hemingway is the lead author of the study and a Carnegie Fellow with the Institute's Department of Terrestrial. He says that the Tiger stripes are something peculiar and nothing like it seen in our solar system. The linear fissures are 130 kilometers long and are evenly spaced about 35 kilometers parallel to each other. The most interesting fact about this is that they erupt with water ice.

The reason for these fissures found only on the south pole was solved first with the simple finding that it was also on the other pole but yet to split open like the south pole. And their reason for existence is due to the Enceladus interaction with Saturn and the eccentricity of its orbit.

Maxwell Rudolph said that it was only through these fissures that the scientists were able to sample and study Enceladus' subsurface ocean, which is beloved by astrobiologists. Already from the Cassini mission in 2004, it was confirmed that the plumes erupting from the four fissures contain organic molecules. Now ice water eruption and the cause of the four fissures are found. In future missions, scientists will attempt to determine whether any extraterrestrial life exists beneath the Saturn moon Enceladus's icy surface.