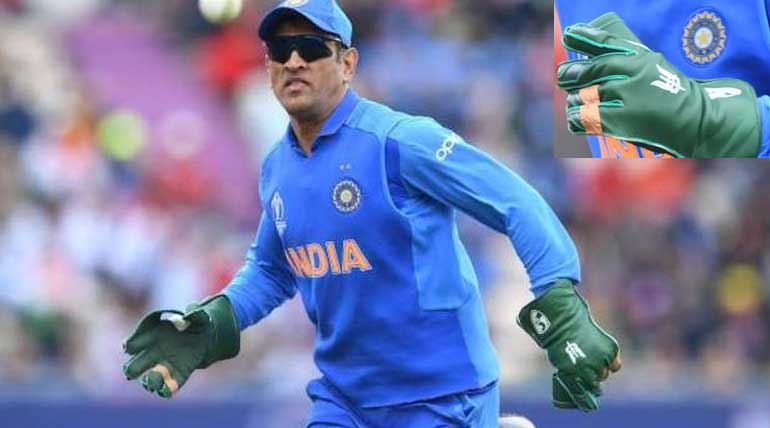 ICC CWC 2019: The ongoing controversy of Dhoniâ€™s wicketkeeping gloves have been the hot debate among cricket fans. In India, where cricket is religion and Dhoni, their favourite could not afford to miss the vital match against Australia in this world cup. But the insignia printed on the green gloves of Dhoni consisting of a dagger with wings resembling the badge of the Para or Special Forces is the issue. ICC rejected BCCIâ€™s request to allow Dhoni to play with the same gloves. Hence, now the big question is will he be allowed to play against Australia on Sunday.

Why is ICC does not want the insignia resembling special forces badge in Dhoniâ€™s gloves ICC CWC 2019?

As per the ICC rules, the players on the ground should have only logos of sponsors, national, and other specific logos as per the regulations. It bars players from sporting anything that is relating to political, religious, racist activities or causes. It is to signify the glory of cricket about all this around the world. In FIFA matches also there were several bans on the players for portraying such kind of insignias. ICC asked Sachin Tendulkar to remove the Indian Flag below the BCCI logo on his helmet even some years back. Helmets are kept near footwear and spitting places is the main reason for the rule. The BCCI thought it is disrespect to the Flag and hence banned the use of it.But why is Dhoni insisting on the display of insignia of the dagger with wings?MS Dhoni is an honorary Lieutenant Colonel in the Parachute Regiment of the Territorial Army. The ICC in its request said that the dagger with wings is not representing the Special Forces because it is not having the world sacrifice. From the side of Dhoni, request sent for allowing MSD to play with the same gloves in ICC CWC 2019. For Dhoni, this tournament could be the last of his one day career in cricket. Already he has retired from test cricket. Hence this world cup means a lot to Dhoni and winning it for India, will be a befitting farewell to the much-acclaimed cricketer of India. But this gloves issue has come in between such glory for India or displaying the insignia of Indiaâ€™s Special Forces.