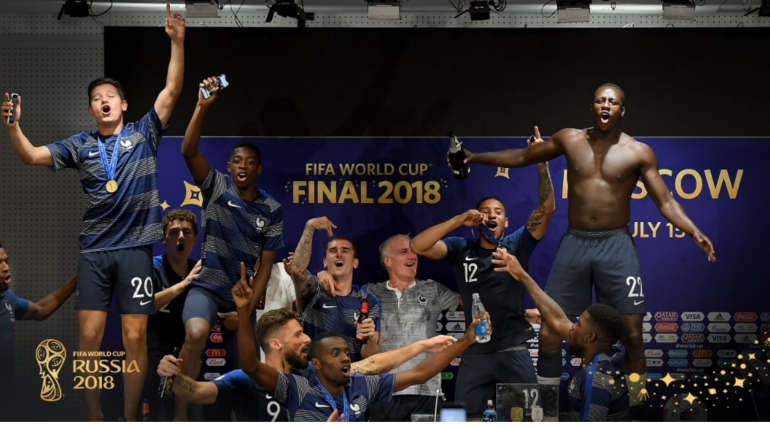 Fifa World Cup 2018 graciously ended on a high note on Sunday night when the French team smashed Croatia and lifted their 2nd FIFA WC title after 20 years. The finals of this cup have been most speculated for the surprise entry of Croatia into finals beating the mighty England and football fans eagerly looked out to see whether Fifa would see a new winner this time, but the fierce French side doesn't allow that happen.

Croatia started by dominating the ball possession although it was an unexpected start for them when Mario Mandzukic scored an own goal to the French side. Then Perisic scored an equaliser at the 28th minute. But the happiness no longer existed for Croatia after Antoine Griezmann scored to take a lead by penalty, that was the result of Persic's handball in the penalty line.

France owned the Second half by hunting for goals.

After halftime, the second half started with multiple shots on target by Croatia but it was French side that dominated by scoring back to back goals. Pogba took the score to 3-1 scoring a fantastic goal followed by the young and talented Mbappe shot from outside the penalty line to make it 4-1. Mandzukic scored a lucky goal for Croatia by making use of the mistake by the French goalie who tried to dribble but ended as a goal.

Croatia tried hard to cross the French defence to score a goal but apparently, the players couldn't score any more in their most awaited finals. A whistle blew after 5 minutes of additional time with 4-2. Didier Deschamps was feeling proud for making their side world cup twice in past 2 decades while the young French side was excited to clinch the most valuable cup for their nation. Luka Modric of Croatia bagged Golden ball and Harry Kane got the Golden Boot for scoring 6 goals in the tournament. Mbappe won the of Young Player Award, while Belgian goalkeeper Thibaut Courtois owned the Golden Glove who made 27 saves in the tournament.