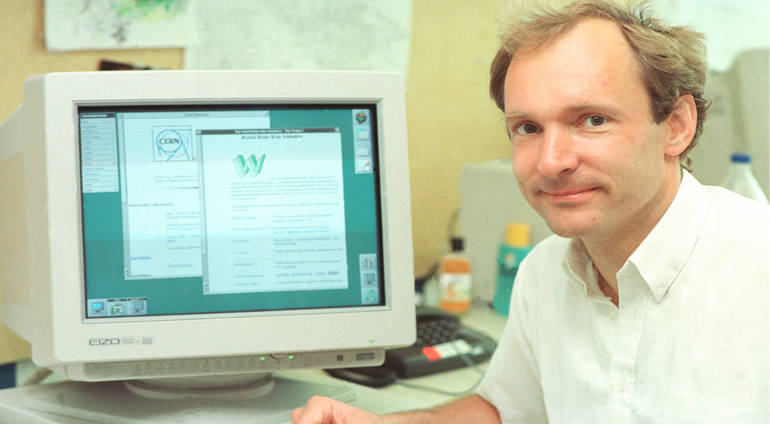 Google Doodle celebrated on Tuesday the 30th anniversary of the World Wide Web an invention that changed the future of the human world. On 12 March 1989, 33-year old Sir Tim Berners-Lee, working in CERN's European laboratory, submitted his "Information Management: A Proposal" to his manager, which we now know as the birth of the World Wide Web.

The first recorded response from his manager Mike Sendall ,was "Wave but exciting". Initially, Berners-Lee was considering "a large hypertext database with typewritten links", to help his colleagues at CERN (a large nuclear physics laboratory in Switzerland) share information between computers. Berners-Lee's manager gave him time to turn the chart into a working template, writing the HTML application HTTP and WorldWideWeb, the first web browser and page editor. In 1991, external web servers were operational.The Web was released in April 1993. Its popularity began to spread from November with the launch of Mosaic, the first search engine to accept images.

This revolutionized the Web, making it user-friendly.Mosaic was later replaced by Internet Explorer, Google Chrome and Mozilla Firefox. Thanks to the Web, the number of Internet users has exploded, rising from several million in the early 1990s to more than 400 million in 2000. The 2000s mark the beginning of wireless internet for all.On the occasion of the 30th anniversary of its breakthrough innovation, World Wide Web inventor Tim Berners-Lee, in an interaction with the media, urged users to strive to maintain "total control" over their data.He criticized the growing commercialization of personal information and his mission is to preserve his invention of a whole range of issues that increasingly dominate online life, including misinformation and lack of data protection.

"You should have full control of your data. It's not oil. It's not a commodity, "he told a small group of journalists at the CERN European Physics Laboratory, where he had the idea of â€‹â€‹the Web 30 years ago.In a letter published Monday, he praised the opportunities created by the Web, giving voice to marginalized groups and facilitating everyday life.But he warned that "this has also created an opportunity for fraudsters, given voice to those who spread hatred and made it easier to commit all kinds of crimes."He was nevertheless optimistic about the possibility of solving problems."If we give up building a better Web now, the Web will not have missed us. We will have failed the Web."