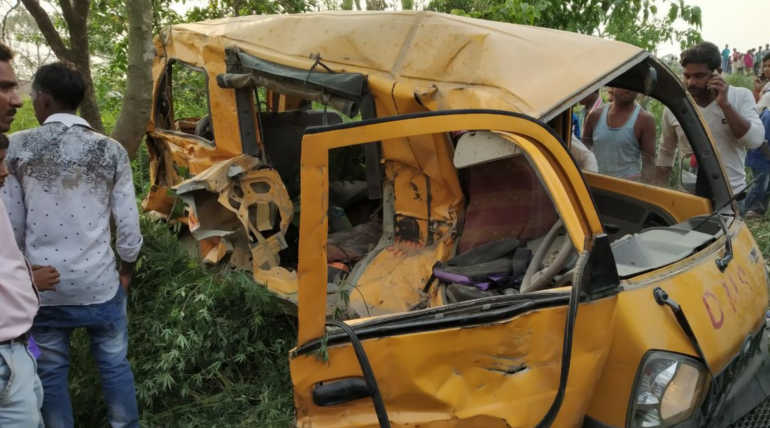 13 school kids have been killed and 8 were injured after a school van collided with a train in the Uttar Pradesh state of India on April 26. Chief Minister of the state Yogi Adhithyanath said to media that the reason for the accident that the driver of the school bus was busy with music.

According to the observation report of Uttar Pradesh police department that the incident took place in the early morning at an unmanned railway crossing near Kushinagar of Uttar Pradesh. The school van had been hit down by a passenger train while the driver tried to make a pass by unnoticing the approaching train.

Reports suggested that almost 25 people were on board especially kids below the age of 10. Soon the kids were urged to a nearby hospital where the doctors declared 13 kids where dead and remaining were admitted for treatment. Hospital report claims that the driver and a kid are still under the critical condition and they fearing that the death toll may be extended.

Piyush Goyal, the railway minister of the nation had ordered to probe the accident and the Chief Minister of the state urged to the accident spot and later he announced a compensation of Rs.2 Lakhs for the deceased and the ex gratia for the injured victims according to their injury.

According to the railway department, the accident had taken place at an unmanned railway crossing which one of the most considering problematic situation in India. The passenger train that on its way to Ghorakpur rammed the school van has towed the van for almost 100 meters before making a halt.

The unmanned railway crossing is one of the major problems of India where many Indians lost their lives. Even though the railway ministry of India had faced many consequences due to the unmanned crossing and some of them are solved by appointing the volunteers but some records claiming that there are still 3500 unmanned crossings across the country.

The railway ministry hoped that within 2020 most of the unmanned crossings will be eliminated.