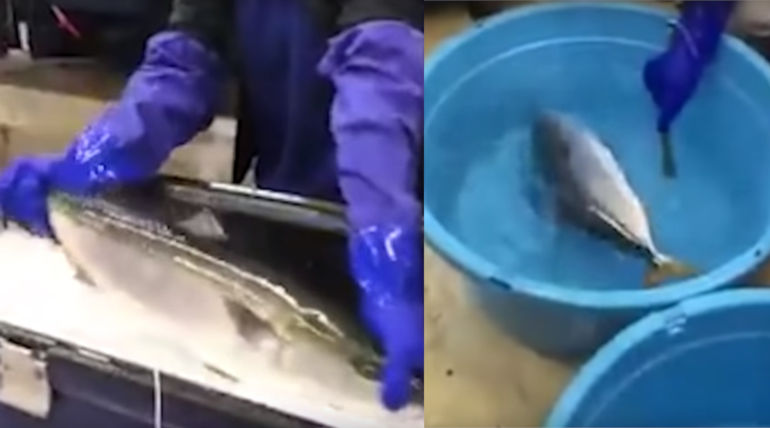 The latest video from Japan shows a Tuna Fish being frozen under the ice and then suddenly coming back to life after placing in warm water. The Facebook video (given below) is being spread across the social media which had its source from Japan in a Pro Fishing Video Page.

The video shows a group of people from Japan keeping fish in a frozen ice while the fish stays frozen and looks like a dead meat. The temperature was shown to be -22C (28 F) and then the fish which is at frozen state is taken out. It is placed inside a tub of warm water and after the man shook it gently, the fish moved rapidly inside the water showing that it is alive.

The video became a sensation in media and being watched as a miraculous visual by the people. The science behind the act is the fact that a fish is kept in ice to keep it fresh usually. During that time it is not completely killed but lets their heartbeat down. The fish which live in cold water produces antifreeze agents in blood to manage at freezing temperatures.

Meanwhile, the metabolism of the fish slows down according to their cold-blooded nature. After placing it in the warm water, the fish revokes and gets back to life starting to move around normally. The incredible scene is being watched by many people while most of them are claiming it to be fake and some calling it a cruel act as it would torture and kill the fish possibly.

Earlier in January 2016, the Japanese researchers brought back a frozen water bear to life, which then lived for three decades laying 19 eggs with 14 of them being hatched successfully.